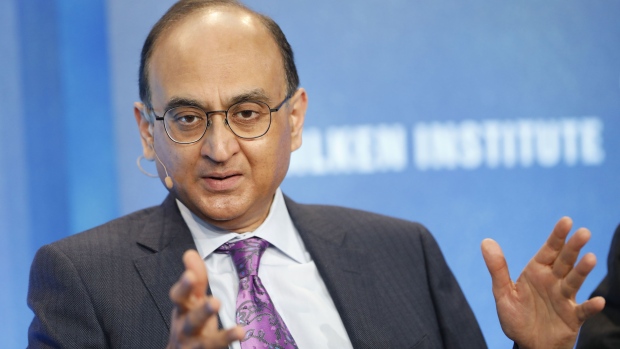 Vasant Prabhu, chief financial officer of Visa Inc., speaks during the Milken Institute Global Conference in Beverly Hills, California, U.S., on Tuesday, May 2, 2017. The conference is a unique setting that convenes individuals with the capital, power and influence to move the world forward meet face-to-face with those whose expertise and creativity are reinventing industry, philanthropy and media. , Bloomberg

(Bloomberg) -- Visa Inc. believes it can resolve its problems with Amazon.com Inc. as the e-commerce giant is planning to ban usage of the firm’s credit cards issued in the U.K. starting next month.

The payments company was bewildered by the fact that Amazon is taking the step in the U.K., where the fees merchants pay Visa and banks each time consumers swipe a card are tightly regulated, Chief Financial Officer Vasant Prabhu said at an investor conference. Amazon has said it was taking this step and others because of the rising cost of accepting credit-card payments.

“There was no need to punish U.K. consumers for something that had nothing to do with them,” Prabhu said. “The unfortunate thing here is they’ve chosen to penalize a group of consumers that have really nothing to do, have no dog in this fight.”

Visa plays a unique role in the world of payments. Along with Mastercard Inc., the network sets the rates that merchants pay in swipe fees. While banks that issue cards reap the bulk of that fee, Visa has long faced criticism from merchants over rising costs.

Amazon is also considering shifting its popular co-brand credit card to Mastercard amid the simmering tensions with Visa. With its move in the U.K., the retailer is taking a page from rivals Walmart Inc. and Kroger Co., which temporarily instituted similar bans on Visa cards in the past.

“We’ve sorted these out before, we will get back to the point where our relationship with Amazon goes back to where it used to be including the co-brand,” Prabhu said. “Of course, it takes two to tango.”