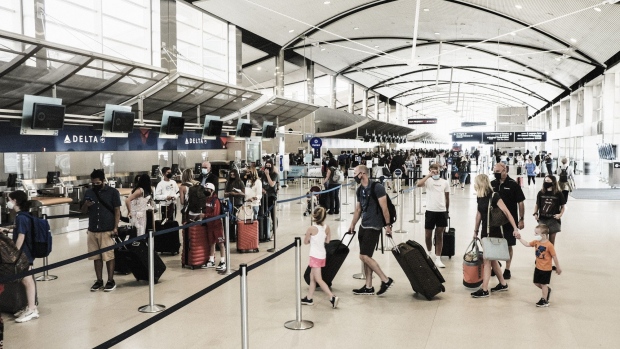 Travelers arrive at the Detroit Metropolitan Wayne County Airport (DTX) in Romulus, Michigan, U.S., on Saturday, June 12, 2021. The acting head of the TSA is reportedly warning that 131 of the largest airports in the U.S. will likely face staffing shortages this month, as air travel begins to pick up amid the nation's Covid-19 recovery. Photographer: Matthew Hatcher/Bloomberg , Bloomberg

(Bloomberg) -- Events collided to provide a windfall for Visa Inc.: A return to travel. The frenzy in crypto. Massive stimulus checks.

Spending on Visa’s cards soared to $2.72 trillion in the firm’s fiscal third quarter, a 34% jump from a year ago when much of the world was under strict lockdowns. That topped the $2.57 trillion average of analyst estimates compiled by Bloomberg.

Visa has been aided by the stimulus checks sent directly to U.S. consumers as well as the gradual reopening and recovery of the nation’s economy. The firm has also said it’s seen increased activity on cards linked to cryptocurrencies as more consumers look to take advantage of the frenzy in digital assets.

“Visa delivered another strong quarter as many key economies are well into a reopening-driven recovery,” Chief Executive Officer Al Kelly said Tuesday in a statement announcing results for the period ended June 30. “This was best demonstrated by credit and face-to-face spending bouncing back,” he said, adding that “cross-border travel spending improved as vaccination rates rose and more borders opened.”

Visa, a sponsor of the Olympic Games in Tokyo this month, has said that it will invest more in marketing. Operating expenses in the quarter jumped 12% to $2.07 billion, led by a 54% increase in marketing costs.

Visa has been on a bit of a deal spree in recent weeks. In June, the payments giant agreed to buy Swedish open-banking platform Tink AB for 1.8 billion euros ($2.1 billion). Last week, the firm said it would buy Currencycloud, a cross-border payments platform, for 700 million pounds ($972 million).

Visa is “continuing to make investments in strategies that will drive future growth,” Kelly said.