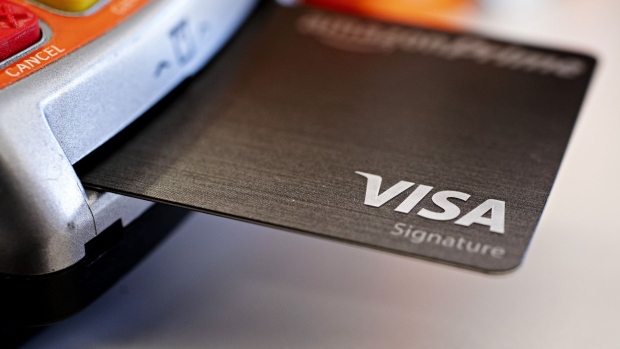 The world’s largest payments network, sold US$3.25 billion of debt in three parts. The shortest portion of the deal is a seven-year green note with at 0.75 per cent coupon, sliding past Google parent Alphabet Inc.’s record low 0.8 per cent from last week on an ESG debt sale with a similar maturity.

Visa’s US$500 million security due 2027 marks the first dollar-denominated green bond from the consumer finance space, according to data compiled by Bloomberg.

The San Francisco-based firm plans to use the proceeds from the green tranche to finance projects that meet eligible categories, including green buildings, renewable energy, sustainable water and wastewater management and projects that support sustainable living behaviors, according to Sustainalytics’ second-party opinion.

Visa said in January that the company reached its goal to use 100 per cent renewable electricity by 2020 through energy sources like solar and wind as part of its sustainability commitment across its operations, including 131 offices in 76 countries and four global processing centers.

Companies and governments have raised about US$113 billion in the green bond market this year, a slight decline from $118 billion in the same period last year, according to data compiled by Bloomberg. Meanwhile, sales of bonds to address social issues jumped a record 376 per cent in the first half of the year as issuers ramped up borrowing to tackle the coronavirus pandemic.

“We expect investor focus on material ESG factors to continue to grow rapidly as interest in social factors is on the rise,” Mark Haefele, chief investment officer at UBS Global Wealth Management, wrote in a note Monday.