Visa Inc. posted its biggest decline in three weeks on Wednesday, dragging down industry peers such as Mastercard Inc., after Amazon.com Inc. said it will stop accepting purchases made with the company’s credit cards issued in the U.K. as of next year.

Shares of Visa slumped 4.7 per cent to the lowest since February, erasing US$22 billion in value, as Amazon kicked back against the high fees charged to process transactions. Losses briefly hit as much as 7.3 per cent in the afternoon after a Bloomberg News report that Amazon is also considering changing its co-branded credit card to rival Mastercard.

The slump adds to what has been a painful three-and-a-half months for Visa, extending its drop from a July record high to 18 per cent. Among other card companies, Mastercard pared some of its earlier drop to lose 2.8 per cent, American Express Co. slipped 0.7 per cent and Synchrony Financial fell 2.1 per cent. 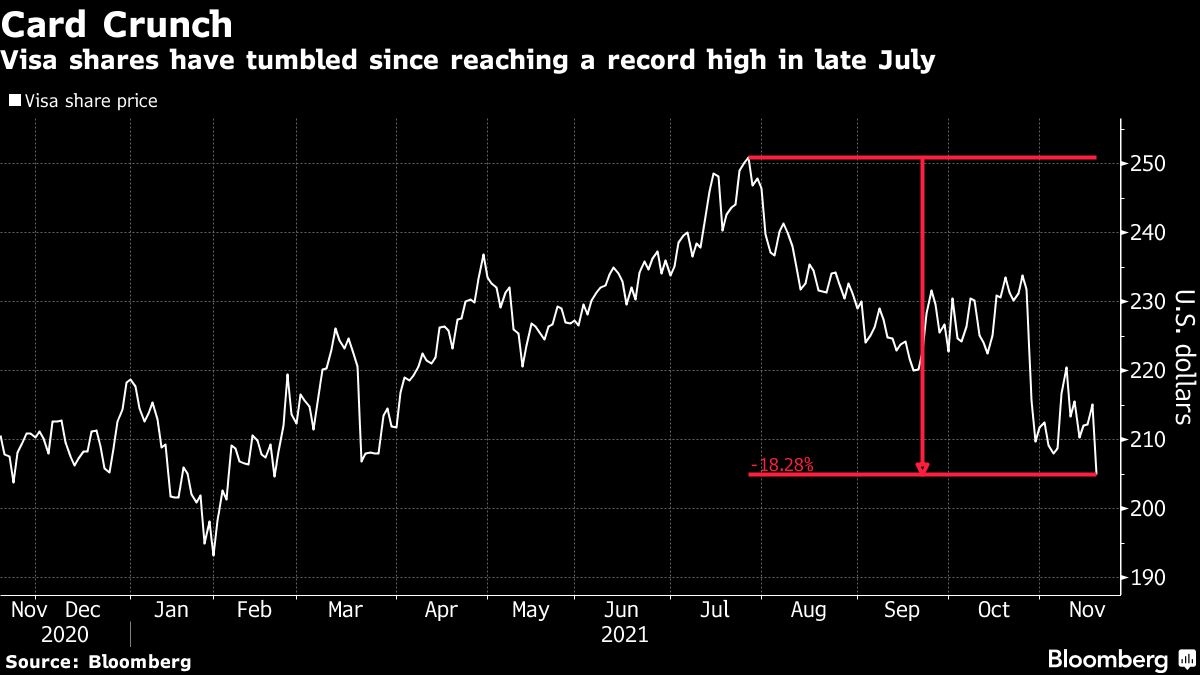 “While we think this is a negative for Visa if Amazon follows through with its plans, we also believe that the two companies will likely reach an agreement that lowers Amazon’s U.K. credit card fees on the Visa network,” said Piper Sandler analyst Chris Donat.

The upcoming U.K. ban is the latest in a series of changes that Amazon has made regarding Visa’s credit cards internationally this year. In August, the e-commerce giant told customers in Singapore that it would be imposing a 0.5 per cent surcharge on all orders made with a Visa credit card. Less than a month later it announced a similar move for customers in Australia.

Investor sentiment toward Visa and other credit card stocks has also waned in recent months amid a surge in so-called buy now, pay later offerings. Companies such as Affirm Holdings Inc., Afterpay Ltd., and Klarna Inc. have seen a surge in popularity this year, fueling concern that consumers will become less reliant on credit cards. Still, analysts have downplayed the risks, saying fears of a structural change are overblown.