Visa Inc. is planning the biggest changes in a decade to the rates U.S. merchants pay to accept its cards, hoping to persuade more people to abandon checks and adjusting its fees for new businesses such as ride-hailing services.

The company’s interchange rates — fees charged every time a consumer uses a card — will go up or down depending on the merchant and the way a consumer pays for their purchases, according to a document Visa sent to banks that outlines the changes. Higher rates are looming for transactions on e-commerce sites, while retailers in certain services categories, such as real estate and education, will see fees decline.

“The U.S. credit interchange structure has been largely unchanged for the past 10 years,” Visa said in the document, which was seen by Bloomberg. “Based on the most recent review in the U.S., Visa is adjusting its default U.S. interchange rate structure to optimize acceptance and usage and reflect the current value of Visa products.”

While the changes amount to just a few cents on every transaction, those pennies add up. Swipe fees are already a flashpoint between merchants, banks and payment networks such as Visa and Mastercard Inc. Retailers have long complained about the more than $100 billion they spend each year to accept electronic payments, a figure that’s grown in recent years as fees increase and consumers flock to premium cards, which carry higher interchange rates.

Payment processors are updating their systems and readying merchants for the new rates, which will be rolled out in April and October, according to the document. San Francisco-based Visa planned the two-part implementation as a way to give processors more time to implement the changes, according to a person familiar with the network’s thinking who asked not to be named because the matter is private.

Visa and Mastercard are the intermediaries that facilitate more than $6.5 trillion in card payments in the U.S. each year. While they set the rates that merchants are charged, those fees are technically paid to the bank that issues the card. The bank then passes along a portion of the fee to the network involved in the transaction.

Visa declined to comment on the changes proposed in the document. Mastercard, which has its own interchange policies, had no immediate comment on whether it’s proposing changes of its own.

With Visa’s changes, the interchange rate for so-called card-not-present transactions, which include those made online or over the phone, will increase. For a traditional Visa card, the fee on a US$100 transaction will climb to US$1.99 from US$1.90. For premium Visa cards, the fee will rise to US$2.60 from US$2.50. 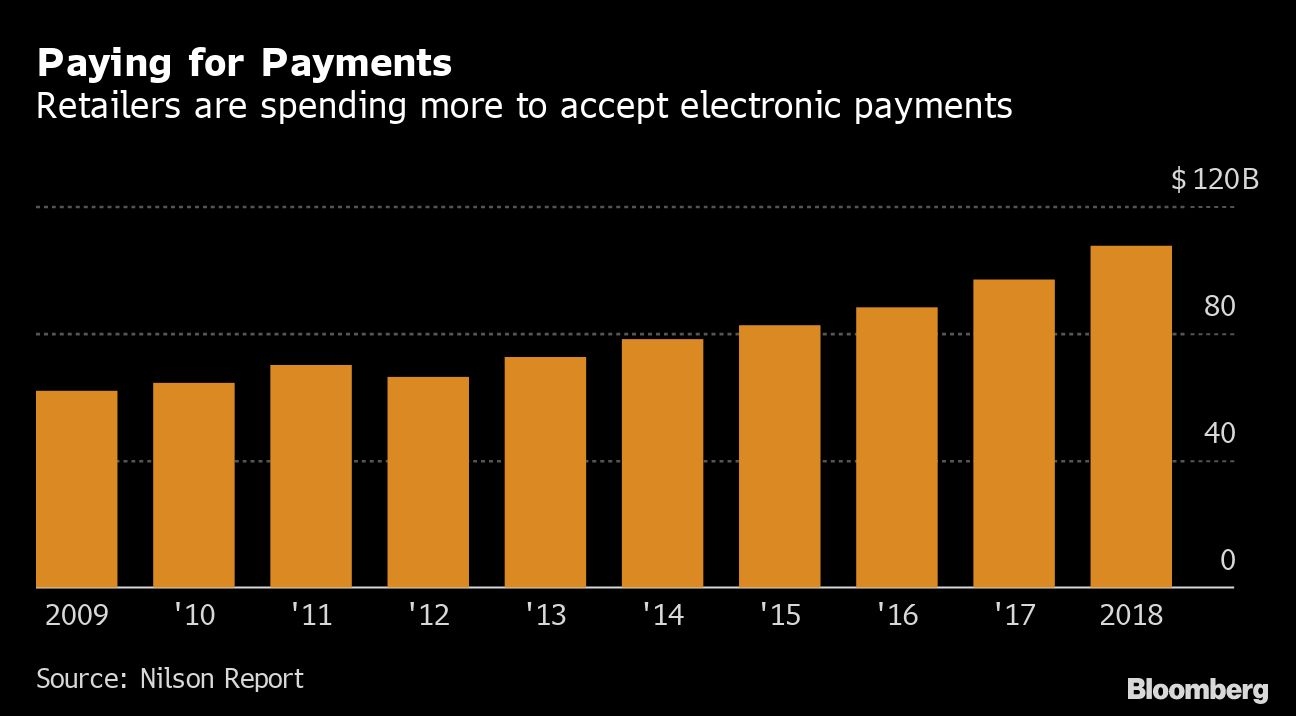 On a premium-card transaction of US$50 for the category that includes large supermarkets, the interchange fee will drop 33 per cent, to 77 cents US from US$1.15.

The changes proposed in the document apply to Visa’s so-called published rates. Banks and payments networks can negotiate one-on-one deals with retailers for lower pricing.

For banks, the US$91.2 billion in fees they earn on credit-card portfolios is now more than the interest they charge on the loans. Swipe fees contribute the largest portion — US$52 billion — of the fee income that banks collect, according to data compiled by consultancy R.K. Hammer.

Visa’s new rates for certain service businesses reflect a strategy of trying to boost acceptance of its cards. The network has lowered the rates it charges for the health-care, education and real estate industries as part of the push.

As part of its focus on expanding acceptance of its cards in the U.S., Visa included categories such as rent, parking and vending machines. In 2019, the company’s cards were accepted at 61 million locations around the world, a 14-per-cent increase from the previous year.

“We’re very proud of the growth on the seller side of the ecosystem,” Visa President Ryan McInerney said at an investor conference last year. “But we have a lot more work to do.”