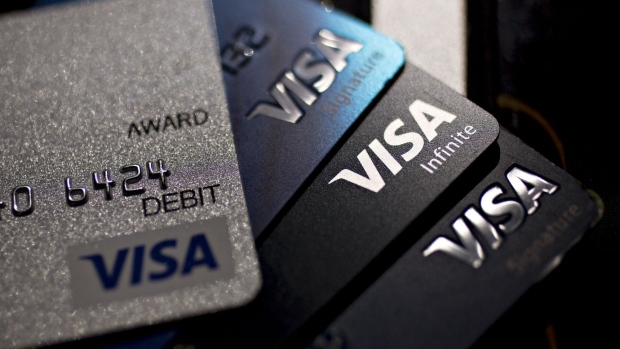 Visa Inc. credit and debit cards are arranged for a photograph in Washington, D.C., U.S., on Monday, April 22, 2019. Visa Inc. is scheduled to release earnings figures on April 24. , Bloomberg

Visa Inc.’s US$5.3 billion acquisition of Plaid Inc. has raised competition concerns at the U.S. Justice Department, which is nearing a decision about whether to sue to block the deal, according to two people familiar with the matter.

Lawyers at the Justice Department’s antitrust division who are investigating the takeover are worried the deal could allow Visa to acquire a potential competitor, said the people. The division’s leadership hasn’t made a final decision about whether to sue.

The Justice Department, Visa and Plaid declined to comment.

Visa operates a network that facilitates payments between consumers and merchants around the world. Plaid connects a bevy of financial technology apps with the data sitting inside consumers’ bank accounts.

Visa said in January it was seeking to purchase Plaid in a deal that was valued at US$5.3 billion and the two companies hoped to close the transaction within three to six months. By July, the company acknowledged it needed more time to satisfy regulators’ concerns.

“We certainly are expecting to close by the end of the calendar year and are doing everything we can to comply with any request from the regulators that are looking at it,” Chief Executive Officer Al Kelly told analysts on a conference call in July.