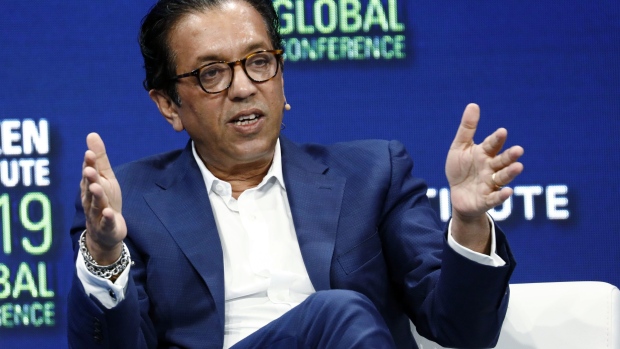 Rajeev Misra, chief executive officer of SoftBank Investment Advisers, speaks during the Milken Institute Global Conference in Beverly Hills, California, U.S., on Monday, April 29, 2019. The conference brings together leaders in business, government, technology, philanthropy, academia, and the media to discuss actionable and collaborative solutions to some of the most important questions of our time. , Bloomberg

He said that companies that had asked the Vision Fund for unrealistically high valuations last year, and wound up not doing a deal, had in recent weeks asked the firm to reengage.

Misra also said that private companies have over-high valuations compared to publicly traded companies, citing the software-as-a-service market as an example. There, private companies are often still valued at 20 times forward revenue, he said, but in public markets, SAAS company valuations have come down to about 12 times revenue.

“That gap is going to tighten over the next six months,” he said of the discrepancy between public and private markets. Misra, who leads the famous multibillion-dollar investment fund for the Japanese conglomerate, spoke on Wednesday at an Axios Pro Rata event.

The Vision Fund is exercising more valuation discipline “in a big way,” Misra said. The average check size for the Vision Fund 2 — the newer, smaller version of SoftBank’s startup investing arm — is $200 million, compared to about $1 billion for the first Vision Fund.

Outside investors backed the first fund, but SoftBank is investing only its own cash in Vision Fund 2. The fund will take money from outside investors again eventually, he said.

Misra also said he was optimistic about companies in China, expecting an end to the current “turmoil” in the second half of this year.