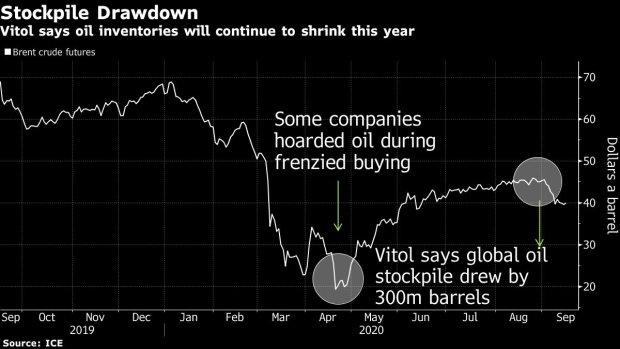 (Bloomberg) -- The world’s biggest independent oil trader says global stockpiles of the commodity will keep shrinking, offering a starkly more bullish view of the crude market than some of its rivals.

Vitol Group said inventories have been falling sharply and will continue to decline this year. Trafigura Group, the second-biggest trader, says the market will go back into a surplus. Both companies forecast demand to stagnate and foresee a volatile few months before a gradual recovery next year.

“You can’t lose sight of the fact that production has been curtailed,” Hardy said in an interview during the Platts APPEC 2020 conference. A lot of stock draws are expected to come from refineries digesting what they had amassed during the frenzied buying of cheap oil, he said.

Months after the coronavirus caused nationwide lockdowns, the hoarding of crude at sea, and a sub-zero plunge in prices, the industry is still coming to terms with some of the longer-lasting impacts on fuel consumption. Now, as many countries start to contend with a second wave of infections, Vitol, Trafigura and others are adjusting to a very different environment.

Demand should stay largely unchanged at around 96 million barrels a day, Hardy said. That compares with Vitol’s view a year ago that it would be about 102 million barrels a day. Diesel consumption will improve slightly and offset a decline in gasoline demand over winter, while Vitol doesn’t see much improvement in jet fuel use.

“Jet fuel looks bad, diesel less affected and gasoline demand is probably the one we’re a little bit worried about,” Hardy said. Consumption of motor fuel will be especially vulnerable if the virus spikes again, he said.

For now, Brent’s market structure and cheap freight rates are just about making it economic for oil to go into floating storage, he said. Vitol, together with Trafigura and other traders, recently booked more than a dozen ships for this trading strategy.

The 55-year-old Vitol CEO, who’s been in charge of the company for about two and a half years, cautioned that the recovery would be bumpy. Still, Asian demand will help take global consumption to new highs over the 2022 to 2024 period, Hardy said, adding that he’s less bullish about the outlook in the U.S. and Europe. Brent would likely trade above $40 a barrel in the first half of next year, he said.

The global benchmark crude was trading near $41 a barrel early Wednesday after jumping 2.3% in the previous session. It’s still down around 10% this month.

“It’s going to be choppier in the next two to three months,” Hardy said. “Things may get a little more difficult before it gets better, but we do believe that we’ll get through it and things will steadily improve.”