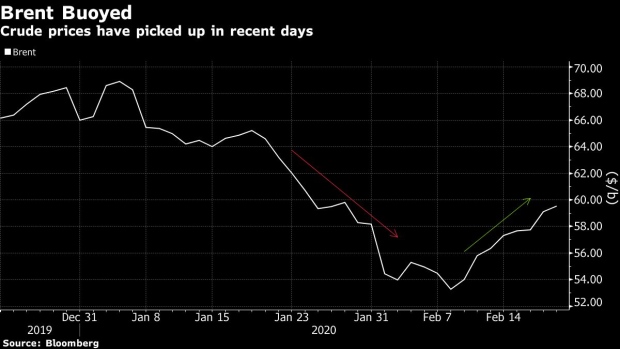 Excess fluid sits on the rim of a barrel of oil based lubricant at Rock Oil Ltd.'s factory in Warrington, U.K., on Monday, March 13, 2017. Oil declined after Saudi Arabia told OPEC it raised production back above 10 million barrels a day in February, reversing about a third of the cuts it made the previous month. Photographer: Bloomberg/Bloomberg , Bloomberg via Getty Images

(Bloomberg) -- The oil market is poised for a recovery but will have to first tackle a severe virus-induced demand slump, the chief of Vitol Group said.

The market is facing a 200 million-barrel demand loss in the first quarter, with a 4 million barrels a day decrease in China currently as the virus hits economic activity and restricts travel, Chief Executive Officer Russell Hardy said. While that adds to similarly pessimistic views, including from the International Energy Agency, he said lower supply from Libya and Venezuela and the prospect of deeper cuts from OPEC is easing concerns for the market.

“All of those factors are going to help re-balance the 200 million barrels, which will leave the market in a better position for the second half of the year,” Hardy said in a Bloomberg television interview. “There’s an OPEC meeting to come in a couple of weeks time and the market’s anticipating some kind of supply response from OPEC.”

Brent rose for seven consecutive days through Wednesday in the longest rally in a year, after hitting the lowest since December 2018 on Monday. Since then expectations of the worst-case scenarios from the impact of the virus have been reduced, boosting prices toward $60 a barrel, Hardy said.

Vitol, the world’s largest independent oil trader, expects prices to recover to $60-$70 a barrel in the coming months.

OPEC and its allies will have a big part to play in the market’s revival. Technical experts from the coalition this month recommended a further supply curb of 600,000 barrels a day until June. That’s on top of the 2.1 million barrel-a-day cut it is already making. The alliance is scheduled to meet March 5-6 in Vienna.

While the Vitol boss’s comments indicate an oil market in repair, whittling down any glut created by the demand loss in China will be a difficult task. Saudi Energy Minister Abdulaziz bin Salman, which has been pushing for weeks for an emergency meeting of OPEC+, this week equated the coronavirus’s impact on the market to a house on fire.

The IEA expects global oil demand to drop in the first quarter for the first time in over a decade. For 2020 as a whole, the virus will curb annual growth in global consumption by about 30% to 825,000 barrels a day, the lowest since 2011, according to the Paris-based agency.

To contact the editors responsible for this story: James Herron at jherron9@bloomberg.net, Rakteem Katakey, Christopher Sell