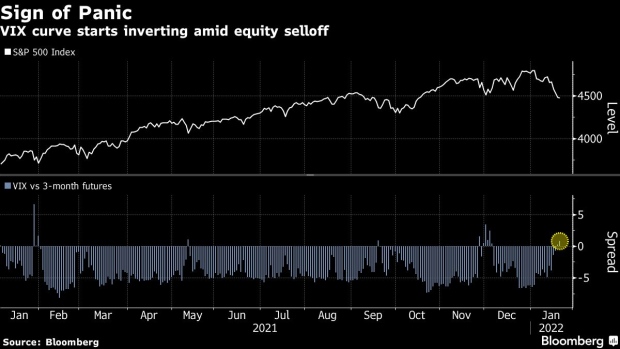 (Bloomberg) -- Selling has gotten intense enough in stocks that volatility indexes are pricing more turbulence in the here and now than in the future. The setup, known as an inverted VIX, is sometimes viewed as a positive for those hoping markets will calm.

As the S&P 500 suffered its worst week since October 2020, traders are paying up for near-term protection. The Cboe Volatility Index, a gauge of option costs, has surged 7 points to 26 over the span, pushing its spot price above that of its three-month futures for the first time in more than a month.

Such an inverted curve has occurred four other times in the past year and all coincided with market bottoms.

Stocks continued to waver Friday amid concern over Federal Reserve tightening and disappointing results from pandemic darlings like Netflix Inc. At its worst point, the Nasdaq 100 dropped as much as 2%, extending further into its correction territory. A flurry of selling orders were fired, sparking extreme readings in some technical indicators such as the TICK index and New York Stock Exchange Short-Term Trading Index, or TRIN.

“Into the open today, we were looking for indications of panic readings for a more tradeable bottom ahead,” said Alon Rosin, Oppenheimer & Co.’s head of institutional equity derivatives. “Between the TICK/TRIN readings during the morning flush and VIX inversions, it is possible that fear, panic has finally arrived.”

Stocks were little changed in late Friday morning trade, with the S&P 500 on track for a 3.7% decline over the shortened trading week.