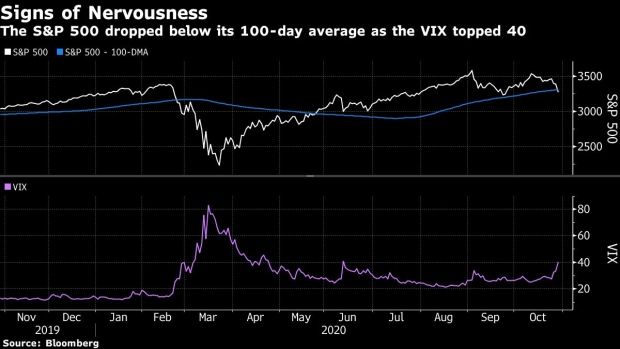 (Bloomberg) -- Some strategists are recommending betting on a decline in volatility after a measure of implied equity swings for the S&P 500 index reached the highest level in more than four months.

The Cboe Volatility Index, or VIX, remains near its Wednesday closing level of 40.28 -- which was the highest since June 11 -- following an equity selloff this week that erased $1.6 trillion from the stock market gauge. Surging virus cases, fresh lockdowns in some nations and concern about a contested U.S. election result have all been cited as reasons for the drop in stocks.

Evercore ISI strategist Dennis DeBusschere said in a note Wednesday the time may be ripe to “sell volatility,” while Amy Wu Silverman at RBC Capital Markets recommended an options trade on the SPDR S&P 500 ETF Trust that pays if volatility eases after the Nov. 3 vote.

Progress on an vaccine and the hope the election will resolve some of the current political uncertainty in the U.S. back the idea of selling volatility, according to DeBusschere.

Silverman’s recommendation is to sell Nov. 20 $345 calls on the SPDR S&P 500 ETF Trust to buy Dec. 31 $350 calls. That trade would benefit from the announcement of a vaccine in December and is a bet that “volatility will be ‘sucked’ out of the market if we have a clear winner” on Nov. 4 or the days after, she wrote in a note.

The VIX was at 39.95 as of 12:59 p.m. in London, higher than the average of 27.4 in the past year. Current levels are “pretty unusual territory,” Nicholas Colas, co-founder of DataTrek Research, wrote in a note, adding the gauge is “seldom in this neighborhood and it needs to find its way back to lower levels. Soon.”