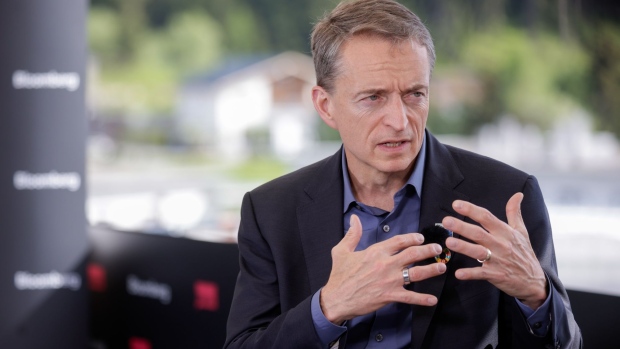 Patrick Gelsinger, chief executive officer of Intel Corp., following a Bloomberg Television interview on the opening day of the World Economic Forum (WEF) in Davos, Switzerland, on Monday, May 23, 2022. The annual Davos gathering of political leaders, top executives and celebrities runs from May 22 to 26. Photographer: Jason Alden/Bloomberg , Bloomberg

“I’m sort of mixed on the current thinking,” Gelsinger said in an interview with Bloomberg TV in Davos, Switzerland, on Monday. “If it helps VMware be a more compelling, innovative growth story, then it’s good - if it does not, then it’s not good.”

Bloomberg reported Sunday that semiconductor giant Broadcom is in talks to acquire cloud software provider VMware, which Gelsinger led as CEO before returning to Intel, where he started his career. “I put eight years of my life - my soul - into VMware. So, I was a bit startled reading that,” he said.

With sinking tech valuations, further industry consolidation is likely, Gelsinger said. He added that more initial public offerings are also likely, and he hopes that Intel will complete the IPO of Mobileye this year. The autonomous driving company was acquired by Intel in 2017.

As for the supply chain challenges which have plagued the semiconductor industry over recent years - Gelsinger doesn’t see a balance between demand and supply until 2024.