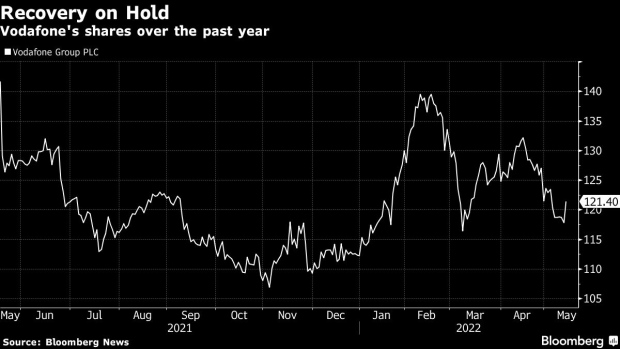 A wealthy, supportive shareholder could give Read cover to reset expectations around investment and profits by supporting the share price, Jefferies analyst Jerry Dellis said. That could give him greater cover to spend upgrading its network -- such as Vodafone’s cable footprint in Germany to fiber.

“We expect e& to counteract activist pressure, not add to it,” said Dellis in a note to clients. He noted e&’s CEO Hatem Dowidar previously worked at Vodafone for 17 years, including with Read.

Vodafone shares rose as much as 4.2% in early trading in London on Monday, while shares in e& rose as much as 9.3%. On Saturday e& announced it had taken a $4.4 billion stake -- offering about 130 pence ($1.59) a share, according to Bloomberg calculations. The price represents a premium of about 10% to Friday’s closing price for Vodafone shares, which have been trading at only about half of their 2018 high. Vodafone reports full-year results Tuesday.

Read publicly said he is pursuing deals in the UK, Spain, Italy and Portugal. Since then, rival Orange SA clinched the biggest likely deal in Spain, Read turned down an offer for Vodafone Italy from Iliad SA, and previous talks with CK Hutchison Holdings Ltd. for a deal in Britain have yet to yield results.

Abu Dhabi-based e& said it is supportive of Read’s team and approach, isn’t seeking board seats, and it committed not to launch a takeover bid for the next six months. The Vodafone stake marks a change in e&’s strategy after it set out a plan earlier this year to diversify its investments across regions and currencies.

Supportive or not, e&’s arrival may trigger new takeover concerns for Vodafone’s board, which recently added three directors with telecom, technology and regulator experience.

After e&’s standstill expires, its controlling shareholder, the UAE state, could easily find a way to fund a full acquisition, said New Street Research Analyst James Ratzer in a weekend note to clients. That would face political investigation by the UK, which has tightened takeover rules.

Read’s biggest move since becoming CEO in October 2018 was to carve out and separately list Vodafone’s tens of thousands of mobile masts in the company Vantage Towers AG. That company now faces its own widespread expectations to consolidate with rivals like the mobile operator-owned tower rivals from Deutsche Telekom AG, Orange, or a pure specialist tower company like Cellnex Telecom SA.

Vantage is still 82% owned by Vodafone and reported results largely in line with expectations earlier on Monday, setting out expectations for 3%-5% sales growth.