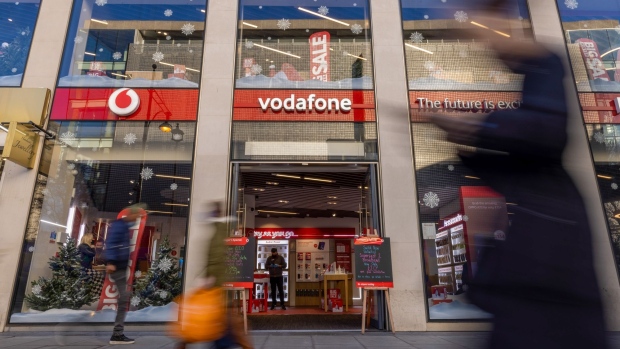 A Vodafone Group Plc mobile phone store in London, U.K., on Monday, Jan. 17, 2022. Britains phone companies are preparing to roll out their biggest price increases in years, exacerbating a cost-of-living squeeze that has darkened the nations economic outlook. , Bloomberg

Vodafone expressed interest late last year in an acquisition of Three UK, according to the people, who asked not to be identified because the information is private. The approach didn’t lead to an agreement, and it isn’t currently in active negotiations with CK Hutchison, the people said.

Shares of CK Hutchison, led by billionaire Victor Li, have risen 11% this year to give the Hong Kong conglomerate a market value of about $27.5 billion. Vodafone has a market capitalization of 31.8 billion pounds ($43.2 billion) in London.

Representatives for Vodafone and CK Hutchison declined to comment.

A combination of Vodafone and Three UK has been speculated for years, and Vodafone has teamed up with CK Hutchison in other markets like Australia. But in Britain, regulators have stood in the way of consolidation between wireless carriers. In 2016, Three was blocked from buying rival operator O2 by the European Union with backing from U.K. watchdog Ofcom.

Other markets have started allowing deals that reduce the number of mobile players from four to three -- including in Ireland, where Three acquired O2’s local business. After Brexit and years of stagnant returns for the sector, some phone company bosses have been hoping the dynamic would change in the U.K. as well.

Three UK Chief Executive Officer Robert Finnegan has lamented the British phone market as “dysfunctional” and expressed his hopes that regulators will now be more open-minded to mergers. Meanwhile, Vodafone CEO Nick Read hinted at a combination with Three in a November interview with the Sunday Times newspaper.