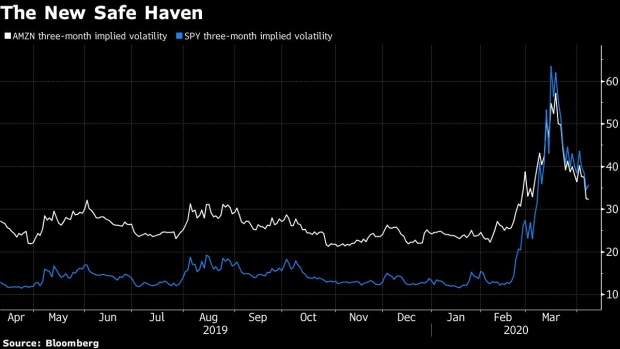 (Bloomberg) -- Investors are redefining what constitutes safety in the stock market as the unprecedented lockdown of the U.S. economy takes hold.

Options pricing is showing traders have more faith in Amazon.com Inc. holding up than they do in the broader market. The anomaly, never before seen in data going back to 2010, puts the three-month implied volatility of the e-commerce giant below that of the SPDR S&P 500 ETF Trust. It has been an average of 15.6 points higher during the past decade.

In normal times, a large group of stocks will tend to have a lower implied volatility than any individual company because of the likelihood of offsetting gains and losses among many moving parts.

But things are different now because Amazon -- the biggest weight in the consumer discretionary index -- has become perhaps the most important consumer staple as Americans shelter in place. The stock is less than 7% off its all-time high despite labor strife driven by employee safety concerns amid the coronavirus. That compares to a drawdown of almost 20% for the exchange-traded fund that tracks the S&P 500 Index.It’s one thing for traditionally defensive companies like the health care conglomerate Johnson & Johnson or diversified behemoths like Berkshire Hathaway Inc. to occasionally post implied volatility below the broad market. That happens, albeit rarely, during periods of stress. It’s quite another thing for this to happen to a high-growth company trading at 46 times forward earnings.To some, this volatility anomaly suggests a bottom may not be in yet for stocks, as some of the bull market’s darlings haven’t been sufficiently punished during this bear market. Alphabet Inc., for instance, is another member of the so-called FANG quartet with lower three-month implied volatility than the SPY ETF.“The mega caps in the Nasdaq 100 have been bastions of stability relative to the market as a whole,” said Steve Sosnick, chief strategist at Interactive Brokers. “Those remain relatively impervious to the broader fears, and that means they haven’t capitulated yet.”While implied volatility aims to look into the future, the recent past shows a similar phonemon fo Amazon. The stock’s 60-session historial volatility is lower than the benchmark equity index’s for the first time on record.

It’s the culmination of a major change in the character of the stock: Over the five years ending April 2018, Amazon’s beta to the broad market was 1.21, indicating the shares tended to post daily moves 21% larger than the S&P 500 Index. Over the past two years, that measure has shrunk to 0.89.

The Covid-19 outbreak has created a market in which all stocks are affected by a common factor, and tend to move in harmony. The discount in Amazon’s volatility relative to SPY also speaks to an expectation that this dynamic will continue, even as the White House develops plans to re-open some parts of the U.S. economy.