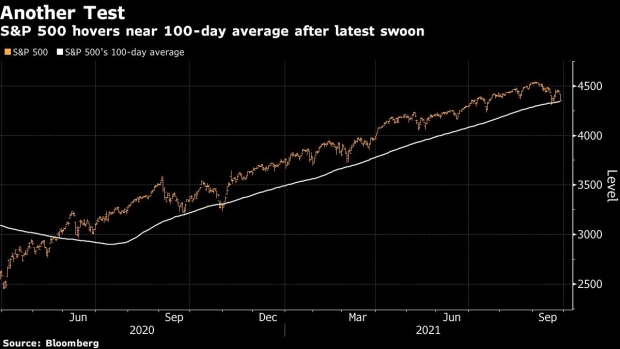 (Bloomberg) -- For the second time in two weeks, a selloff has sent the S&P 500 plummeting to chart levels that marked its floor for a decade. And once again there’s evidence options traders were prepared for the swoon.

The Cboe Volatility Index, or VIX, posted an outsize move. Prices for bearish options rose. Data show a taste for derivative-borne speculation easing significantly. Taken together, the signals point to creeping bearishness at the market’s edges. While hardly a vote of confidence in more equity gains, similar precautions put a brake on past routs.

Stocks sold off Tuesday as richly valued software and internet stocks led another retreat amid a spike in Treasury yields. The S&P 500, down 2% to 4,352 for its worst day since May, barely holding above its 100-day average, currently at 4,341.

“This is orderly, and tells me more that traders are looking for another successful test of the 100-day than panicking,” said Steve Sosnick, chief strategist at Interactive Brokers. The curve in VIX futures “doesn’t have the ‘get me out’ level of inversion that indicates the culmination of a panic.”

The VIX, a gauge of options cost tied to S&P 500, jumped as much as 6 points to almost 25 as options traders piled on protection. So urgent was the demand for hedging against the imminent loss that the VIX’s spot price briefly climbed above that of its two-month futures, producing an inversion that typically signals heightened stress.

Investors had a lot to be worried about, including a fourth day of surging bond yields and their potential to lure money out of equities. Add concern about the government debt ceiling, rising political static around the Federal Reserve, as well as commodity inflation, and it produced a rush into hedges.

While strategists at Bank of America Corp. warned the prevailing dip-buying mentality sets up the market for bigger trouble, there have been signs lately of speculators reining in some of their recent excesses.

In the options market, retail traders -- the market’s most reliable dip-buyers -- spent just 43% of their total volume on bullish calls last week, down from as much as 55% in February and the lowest share devoted to call options so far in 2021, according to Sundial Capital Research. Meanwhile, purchases of puts -- which protect against downside -- have increased.

To be sure, not everyone views goings-on in volatility markets as indicating all is well. Unlike during the 1.8% rout in the S&P 500 two Monday’s ago, some traders saw people piling on more bearish bets as the day progressed, rather than cashing them out to restock their dip-buying coffers.

“As opposed to hedges being monetized, the volatility moves today are suggesting hedges being added,” said Danny Kirsch, head of options at Cornerstone Macro LLC. “When hedges are added on down days, that to me is a bit of panic.”

Still, the growing appetite for protection probably means the market is better positioned to absorb selling, longer term, setting the stage for a bottoming process, according to Chris Murphy, Susquehanna’s co-head of derivatives strategy.

The bigger-than-average VIX move can “be a sign of capitulation,” he said. “Whether an outsized move will result in a rebound later in the week, I am not sure about that.”