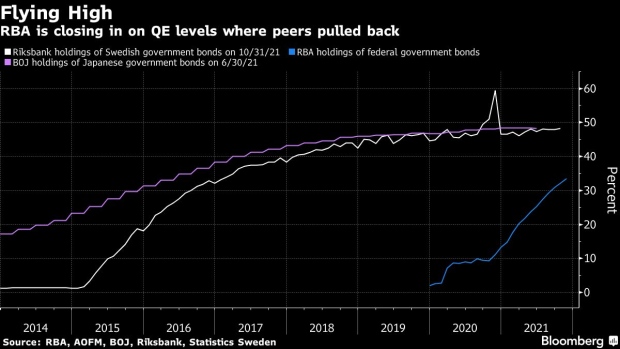 (Bloomberg) -- Australian bonds face further bursts of volatility over the coming months as the central bank risks a repeat of October’s meltdown if it leaves ultra-loose settings in place too long.

Signs of stress are apparent across the nation’s A$875 billion ($627 billion) debt market amid concern the Reserve Bank of Australia’s bond purchases are hampering trading. Bonds are at their most expensive to fundamentals for six years -- based on the yield gap to swap rates -- while traders clamor to borrow notes from the central bank and short-end futures volatility surges.

Benchmark three-year sovereign yields have climbed almost 10 basis points since Tuesday, when the RBA held interest rates at a record low and confirmed it would wait until Feb. 1 to review its A$4 billion-a-week bond purchase program. It abandoned a yield control program early last month after weeks of market turmoil.

“The tight liquidity conditions and positioning in the Australian rate markets has led to significant volatility over the last few months and could be made worse if the RBA keeps buying more bonds next year,” said Kellie Wood, a fixed income fund manager at Schroders Plc in Sydney. “The dramatic end to the RBA’s yield curve control is a prime example of market dysfunction due to central bank intervention.”

Central Bank Governor Philip Lowe is sticking to a more dovish stance than most of his peers, saying he’s “prepared to be patient” because it will take “some time” for actual inflation to be sustainably back within his target band of 2%-3%.

The RBA can point to a level of bond holdings still some ways off the extremes that caused problems for peers in Japan and Sweden. It can also take comfort in the fact that the amount of bonds available to investors is larger than it was before the pandemic, thanks to huge government issuance. And where traders talk of dysfunction, policy makers may merely see a sharp repricing of expectations.

The divergent views have Lowe suggesting the cash rate is likely to stay at 0.1% until late 2023 or 2024, whereas traders and analysts project the first hike coming early in the second half of 2022.

But that is only the beginning of the trouble brewing in rates markets. The following charts dive deeper into the tension as the RBA’s debt holdings climbs to one-third of total issuance.

Interbank cash-rate futures sold off in the wake of this week’s RBA meeting, with implied yields climbing toward the sort of levels last seen in the run up to the November gathering when curve control was ditched. Meanwhile, the February rate jumped to the highest relative to the daily cash rate since the pandemic for a next-meeting contract.

That likely reflects bets the central bank will have to end quantitative easing. This is a scenario that would also fuel further speculation for interest-rate increases in 2022, lifting yields across the cash-rate futures curve.

The RBA isn’t just rapidly buying bonds under QE. It’s also busier than ever lending them out to traders on a short-term basis. That’s coming as benchmark yields drop relative to swap rates, signaling cash bonds are becoming relatively expensive.

The shift underscores concerns that the central bank’s purchases are creating pockets of illiquidity and triggering collateral squeezes when investors are left scrambling to find bonds to settle trades.

“There are some signs that the RBA’s purchases are impacting liquidity,” said Hayden Dimes, rates strategist and markets economist at Australia and New Zealand Banking Group Ltd. “As the RBA continues to buy more bonds, the free float of some lines will continue to be impacted.”

Pressure is also mounting as the Australian government slows down bond sales. The RBA is now snapping up debt faster than it is being issued. The situation will become even more acute soon, with some A$16.4 billion of bonds maturing Dec. 21 and the government lending arm halting sales for a Christmas break.

“There seems less need for the central bank to continue their purchase program,” said Wood, noting that we can expect a smaller government budget deficit as we move toward the end of the 2021-22 fiscal year.

The RBA has some space left before it gets to the levels of bond holdings that peers in Japan and Sweden reached -- but not a lot if it keeps buying at $4 billion a week beyond February. Based on the current pace of purchases, it is likely to hold about 35% of federal government bonds by the end of this year.