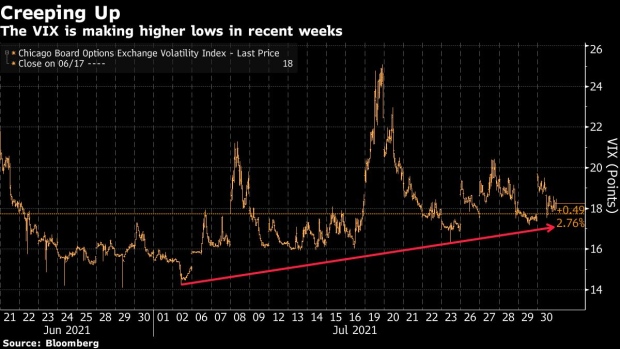 (Bloomberg) -- Concerns about the delta variant of Covid-19 look to be seeping into volatility markets just as the traditionally challenging month of August kicks off.

The Cboe Volatility Index, or VIX, has made a series of higher lows in recent weeks, a pattern Tallbacken Capital Advisors LLC Chief Executive Officer Michael Purves says should concern investors. It’s one of two “yellow warning lights” he sees, with the second being the way high-yield spreads have become “stickier” at higher levels.

“August has a history of volatility spikes, more so than one might think,” Purves wrote in a note dated on Sunday. “This rising tension is subtle, and we suggest it has more to do with Covid persistence than with earnings reports, which on the whole have been remarkably strong so far.”

It isn’t just the VIX that’s flashing concern. S&P 500 skew, which measures the cost of bearish options versus bullish ones, is at its highest level since the beginning of the pandemic a year and a half ago -- even as the S&P 500 soars to records. While the VIX/S&P 500 inverse correlation remains relatively stable, and the VIX itself closed last week below historical averages, there’s still plenty of nervousness about. Investors may need to be wary for the sort of oddball “stocks-up, vol-up” scenario that manifested in the lead-up to February 2018’s Volmageddon, or last August’s retail-investor-driven tech rally.

August and September are the worst months by average S&P 500 performance over the previous 30 years, Susquehanna derivatives strategists pointed out in a recent note.

Other volatility signals have also been showing higher lows in the past few weeks, including the ICE BofA MOVE Index, which measures Treasury-option swings, and the JPMorgan Global FX Volatility Index.

“There is worry but we are nowhere near peak worry,” said RBC’s Amy Wu Silverman. She pointed to bearish put options on the SPDR S&P Retail ETF (ticker XRT) looking expensive versus those on other ETFs, and suggested that’s “due to the delta variant and back-to-school sensitivity.”

Neither Silverman nor Purves sees hedging the S&P 500 as the way to go right now, though, because it’s relatively expensive to do so. Silverman suggests selling Amazon.com Inc. October $3,100 puts as a hedge against further surges in the delta-variant. Purves recommends buying puts for the likes of airline and cruise-ship stocks in case there’s a spike in Covid cases.