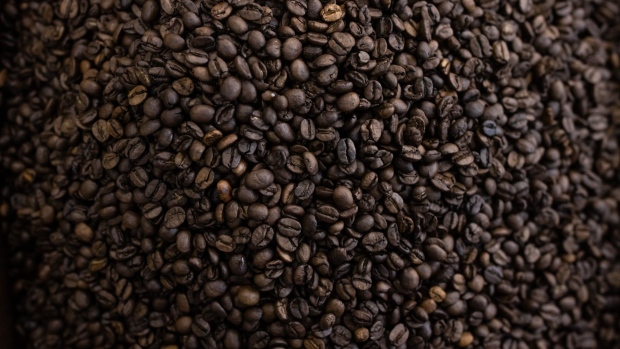 Coffee beans in a roasting facility in Caconde, Sao Paulo state, Brazil, on Wednesday, Aug. 25, 2021. Extreme weather is slamming crops across the globe, bringing with it the threat of further food inflation at a time costs are already hovering near the highest in a decade and hunger is on the rise. Photographer: Jonne Roriz/Bloomberg , Bloomberg

(Bloomberg) -- One of the world’s largest coffee traders expects another year of shortages as drought and frost slash crop potential in top producer Brazil.

Global production is expected to fall 1.4 million bags short of demand in the season that starts in October in most countries, Volcafe Ltd., the coffee unit of commodities trader ED&F Man, said in a quarterly report seen by Bloomberg. That follows a record deficit of 11.2 million bags in the current season.

The shortfall will be driven by Brazil, where the weather-hit arabica crop is likely to be 17% smaller than previously expected, according to the Swiss trader. That could add bullish impetus to prices that surged almost 80% last year, the biggest annual rally since 2010.

A recent survey carried out by Volcafe indicates that Brazil has the potential to produce 37.5 million bags of arabica beans, the milder type favored by Starbucks Corp. That’s down from a crop potential of 45 million bags forecast in September. It also represents a decline of 30% from 2020-21, the last time Brazil’s arabica trees entered the higher-yielding half of a two-year cycle.

The smaller-than-expected crop in Brazil will prevent a build-up of stockpiles, something that usually happens during the higher-yielding cycle, according to the report.

The market will now need to rely on other coffee-producing countries “to boost supply and prevent further rationing by demand as it is doubtful that the market can sustain a third season of structural deficit” in 2023-24, Volcafe said.

Coffee consumption is expected to grow just 1% in 2021-22 and 0.7% the following season, down from a previous forecast of 1.5%, Volcafe estimates. Meeting that demand will mean a higher incorporation of the cheaper and more bitter robusta variety into blends.