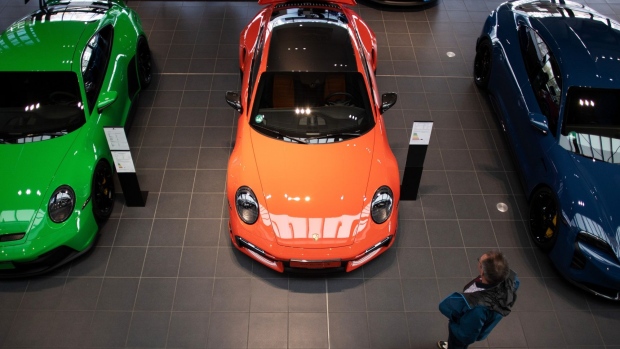 A customer looks at a Porsche GT3, left, a Porsche 911 Turbo, center, and a Porsche Taycan Turbo S automobile at a Porsche SE showroom in Berlin, Germany, on Tuesday, March 29, 2022. Porsche, which reports reports final year earnings today, delivered 301,915 vehicles to customers in 2021, an 11% jump from 2020 and the first time it has surpassed the 300,000 mark. , Bloomberg

(Bloomberg) -- Volkswagen AG set the final listing price for Porsche at 82.50 euros per share, valuing the company at 75 billion euros ($73 billion) as it seeks to prove that the iconic sports-car brand can sidestep the slump in capital markets and pull off Europe’s largest initial public offering in a decade.

A meeting of VW’s supervisory board and its executive committee late Wednesday approved the final list price, which sits at the upper limit of the 76.50-82.50-euro range first offered to investors. Porsche will mark its first day of trading when markets open on Thursday in Frankfurt.

The listing of the 911 maker is a bold move into public markets, which have been largely shut to IPOs for most of the year, with companies shying away from seeking new listings because of the European energy crisis, rising interest rates and record inflation. The sale will help Volkswagen raise funds to plough into its electrification push, while investors get a slice of an emotional brand akin to Ferrari NV, which also managed a successful separation from parent Fiat in 2015.

“If you can pull of an IPO in such a difficult market, it shows the attractiveness of the business,” Jefferies analyst Philippe Houchois said. “Porsche is a mature, well-known business that doesn’t need to raise capital. Putting it on the market as a fully formed business –- being able to pull that off is quite impressive.”

Companies raised less than $10 billion in IPOs this year through August, an 83% drop in proceeds from the same time last year, according to data compiled by Bloomberg. Porsche’s listing is set to be the largest in Europe since miner Glencore Plc raised almost $10 billion in a London IPO in 2011, the data showed.

The share price puts Porsche at a valuation that’s not far from VW’s total market capitalization -- a business that comprises Audi, Skoda, Seat, and the VW brand, among others. Yet for all its aggressive marketing, the listing has also garnered negative attention for its complex structure.

Volkswagen divided Porsche’s share capital into equal parts voting and non-voting shares, with the German carmaker retaining 75% ownership. Some 12.5% of total share capital –- only non-voting shares –- is being publicly listed, with a large portion going to four cornerstone investors. Qatar Investment Authority, Norway’s sovereign wealth fund, T. Rowe Price and ADQ have together committed to take up as much as 3.7 billion euros of the IPO.

The other 12.5% of total shares up for grabs is going directly to VW’s largest shareholders –- the billionaire Porsche and Piech family –- via their investment company Porsche Automobil Holding SE. The family already owns a 53% majority of VW’s voting shares, and under the IPO terms, they will also get 25% plus 1 share of Porsche AG’s voting stock, paying a small premium to preferred shares for a total of 10.1 billion euros.

Porsche SE will mostly finance the acquisition with debt capital of 7.9 billion euros, buying shares in two tranches starting next month with the second purchase expected in January, following a special dividend payout by VW.

Up until 2009, the family owned half of Porsche and all voting rights, but they were forced to sell the sports-car business to VW after their attempt to takeover German carmaker went awry. The IPO restores family control over an asset that has been long out of reach: They get a blocking minority on the sports-car maker’s supervisory board, and their status as VW anchor shareholder bolsters that control.

Porsche is targeting revenue of as much as 39 billion euros this year and return on sales of as much as 18%, up two percentage points from last year, the company said in July. Returns are to climb above 20% in the long term. The company is still best known for its 911 model, though Porsche has expanded its lineup significantly in the past decade by adding popular sports-utility vehicles like the smaller Macan, as well as the four-door Panamera and the battery-powered Taycan.

Besides the byzantine ownership structure, governance is another issue for some investors. Porsche Chief Executive Officer Oliver Blume was recently elevated to CEO of Volkswagen, while retaining his post at the unit.

According to an analysis from Bernstein, Porsche’s market capitalization should sit at 80 billion euros – just below luxury companies but at the higher end of carmakers.

“Compared to the luxury companies, Porsche still exhibits higher volatility in earnings growth and margin profile,” wrote European autos analyst Daniel Roeska. “Porsche has only grown volumes significantly by adding new formats, and that does not seem likely in the upcoming years.”