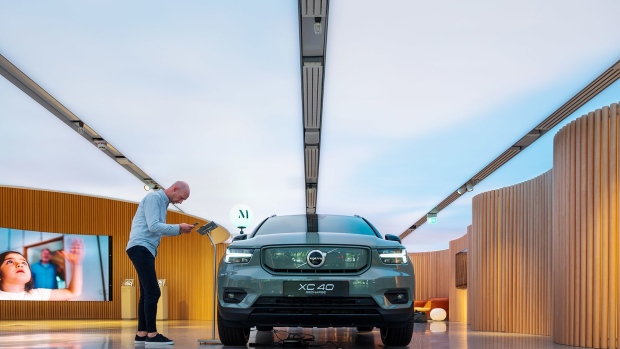 Volvo Car AB is looking to raise 25 billion kronor ($2.9 billion) in a Stockholm initial public offering in a test for automakers amid the sector’s transition to electric vehicles.

The Swedish carmaker, owned by China’s Zhejiang Geely Holding Group Co., is selling shares in a price range of 53 kronor to 68 kronor, according to a statement Monday. The deal values Volvo Cars at as much as 200 billion kronor.

The IPO is set to be Europe’s largest since Polish parcel-locker provider InPost SA’s 2.8 billion-euro offering in January, according to data compiled by Bloomberg.

Proceeds from the share sale will help Volvo shift to a direct-to-consumer sales and subscription model, while the company this year also set an ambitious goal to go fully electric by 2030. Raising additional funds will smooth the shift away from legacy combustion engines, and put the company on course to chase the lofty valuations of other EV specialists like Nio Inc. and Tesla Inc.

The IPO also comes less than a month after electric-vehicle maker Polestar, controlled by Volvo and Geely, said it will go public in New York via a blank-check merger. The deal implies an enterprise value of $20 billion for the startup, with Volvo expecting to hold a 50% stake in Polestar after it lists.

The offering comprises 367.6 million to 471.7 million new shares and the stock is set to start trading in Stockholm on Oct. 28.