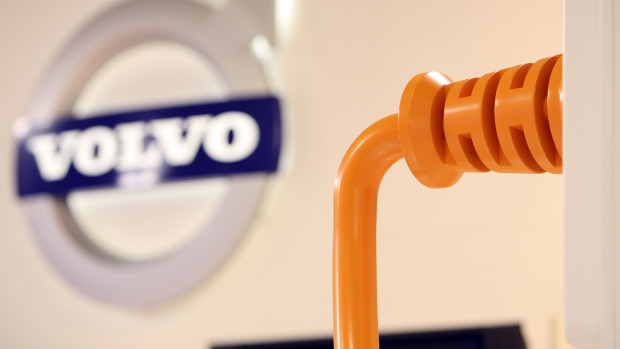 The power cable of a Volvo AB C30 Drive electric automobile is seen charging the car prior to the start of the Paris Motor Show. , Rafaela Lindeberg and Daniel Hornak

The new plant will be able to produce 250,000 electric cars per year, part of the company’s goal of reaching annual sales of 1.2 million cars by 2025 and switching its entire lineup to battery-powered vehicles by the end of the decade.

“Expansion in Europe, our largest sales region, is crucial to our shift to electrification and continued growth,” Chief Executive Officer Jim Rowan said in a statement.

The investment also opens the possibility to build a battery plant nearby to feed directly into the EV production facility, Rowan said at a news conference following the announcement.

“We haven’t made that decision yet, of course, but it gives us the choices,” Rowan said.

Slovakia is among the most productive countries in the world for car manufacturing. It “offers good logistical and transport links to the rest of Europe and access to a good supplier base,” Volvo said in the statement.

Government incentives were “a key factor” in the decision to locate the plant near Kosice, in the eastern part of the country. Around 20% of the investment is expected to be funded by government support, according to the statement.

“This investment is a huge milestone for us, because the eastern part of the country has been suffering from emigration.” Prime Minister Eduard Heger said in Bratislava on Friday, while presenting the deal. “We hope more people will now decide to return home.”

For Volvo Cars, controlled by Zhejiang Geely Holding Group Co., the plant will be its third in Europe.