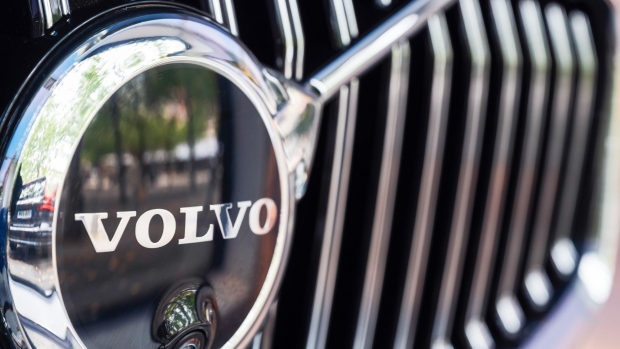 A Volvo badge and parking-assist camera on the grille of an automobile at a Volvo Cars AB dealership in Stockholm, Sweden, on Thursday, Aug. 19, 2021. Volvo Cars said it’s considering an initial public offering months after calling off earlier plans to merge with Geely Automobile Holdings Ltd., the Chinese manufacturer owned by its parent. Photographer: Mikael Sjoberg/Bloomberg , Bloomberg

(Bloomberg) -- Carmakers should consolidate their legacy businesses as electric cars take off with combustion engines set to be in demand for years to come, according to powertrain unit Aurobay.

“The worst thing that can happen to the climate and the world, is that there’s no further development of these technologies,” Fleiss said in an interview. Combining different assets “would absolutely make sense economically -- it’s quite an expensive product.”

Carmakers are increasingly taking steps to address the balancing act between an electric-only future and legacy combustion assets. Volvo Cars last year said it will cease making combustion models by 2030, while Ford Motor Co. in March said it’s separating its fast-growing EV operations and software development from the rest of the business. Renault SA is set to detail plans for a carve-out of its EV assets in November, while Mercedes-Benz AG has said it will only sell electric cars by the end of the decade, where possible.

Aurobay is targeting to become “as big as possible, and that as fast as possible,” Fleiss said, which will require collaboration. “Even if all these predictions and ambitions of selling BEVs come true, in 2040 as many as 75% of cars on the road will still be combustion based.”

The unit, owned two-thirds by Geely and the remainder by Volvo Cars, produced 750,000 combustion and hybrid engines as well as e-motors, at the Skovde plant in Southern Sweden and the Zhangjiakou factory in Hebei province in China. The business employs some 2,900 workers and both facilities used to belong to Volvo, which has been fully owned by Geely since 2010. There’s also a plan to add Geely Automobile Holdings Ltd.’s powertrain operations to the venture at some point in the future.

Fleiss, a long-standing Volvo Cars executive with previous roles at Volkswagen AG, declined to comment on Aurobay holding talks with Renault on their combustion-engine business plans. However, a consolidation of such assets is something that “definitely lies ahead,” he said.

Aurobay may consider a stock market listing “in some years” but has “no active plans,” Fleiss said, adding a surprising number of interested investors are reaching out about options to buy into the company.

“These investors see there’s a big business still to make, and quite some revenue to be done before this technology dies out,” he said.