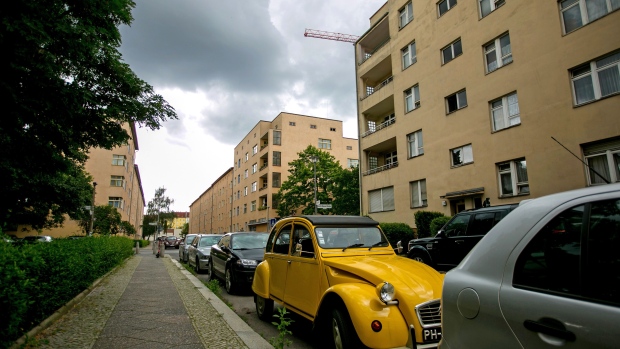 (Bloomberg) -- German landlord Vonovia SE has characterized its move on embattled rival Adler Group SA as taking advantage of an opportunity. Turns out it’s not the first time the company has pushed for a deal.

At the end of last year, Germany’s largest property company was informally sounding out major shareholders in Adler about the possibilities of a transaction, according to people familiar with the situation. The foray was quickly shelved because Aggregate Holdings SA, Adler’s biggest shareholder with a 26% stake, wasn’t drawn by the offer of about 28 euros a share, said the people, who asked not to be identified discussing private deliberations.

Now Vonovia has a chance to snap up that same stake for half its original offer. The company said late on Oct. 7 that it entered into an agreement with Aggregate whereby the Adler shareholder will sell the option of buying 13% at 14 euros a share. The other half of its holding is tied up as collateral for a loan that Vonovia made to Aggregate to help service a margin loan.

Representatives for Vonovia, Adler and Aggregate declined to comment on their discussions last year.

The reversed fortunes for Vonovia and Aggregate highlight the distress that’s befallen Adler -- and by extension Aggregate. The landlord, with about 70,000 properties that include 20,000 prime units in Berlin, has come under fire from short sellers accusing Adler of being built on fraud, a charge the company denies.

Vonovia has been careful not to portray its maneuver as overtly opportunistic, arguing that the German real-estate market would have “no interest in an unstable Adler.” But as Aggregate’s financial situation grew more terse amid Adler’s public woes, pressure increased for the shareholder to return to the negotiation table, said the people.

Adler was created last year via a three-way merger that drew fire from minority shareholders. It has amassed a portfolio of homes across Germany financed with more than 8 billion euros ($9.3 billion) of debt, mostly from the bond market. This week, short seller Fraser Perring’s Viceroy Research published a 61-page report calling the company “a hotbed of fraud, deception and financial misrepresentation.” Adler rejected the findings, saying the value of its holdings has been independently verified.

Should Vonovia follow through with the transaction, it would extend its exposure to a portfolio that includes some attractive assets in Berlin, where rental prices have shot up in recent years. Vonovia is also edging toward finally completing a takeover of German rival Deutsche Wohnen SE after several attempts, a 19-billion euro transaction that ranks among the biggest in the industry.

The move agreed with Vonovia helps stabilize Aggregate, a private holding company controlled by Austrian financier Guenther Walcher, which has directly felt the tremors of the attacks on Adler, one of its major holdings. Its bonds due 2025 dropped into distressed levels and were indicated at 59 cents on the euro on Thursday before rebounding to 70 cents on Friday, according to data compiled by Bloomberg.

Vonovia is under no pressure to exercise the option, which runs for 18 months. For the time being, Adler’s share price remains below the agreed price. The stock, among the world’s worst real-estate performers this year, made up some ground in the last two days, closing at 12 euros on Oct. 8.

That’s still far below the high-point of 29.72 euros at the start of 2021 -- shortly after Vonovia first came knocking.