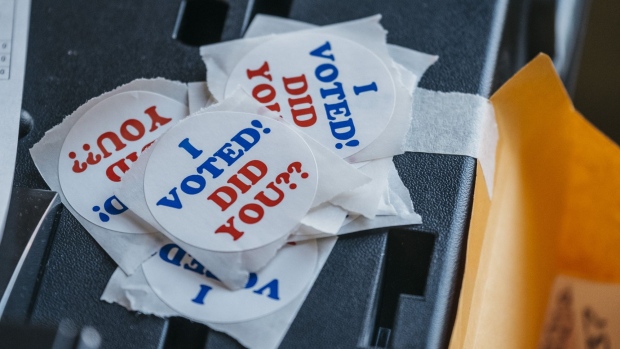 Stickers that read "I Voted! Did You??" sit in a pile at a polling station in Detroit, Michigan, U.S., on Tuesday, March 10, 2020. Bernie Sanders and Joe Biden have canceled planned rallies in Cleveland, Ohio Tuesday amid concerns about coronavirus spreading at public events and suggested the campaigns might suspend large gatherings. Photographer: Erin Kirkland/Bloomberg , Bloomberg

(Bloomberg) -- A series of last-minute challenges to the eligibility of tens of thousands of mostly Democratic voters by acolytes of Donald Trump risk violating federal law and threaten to complicate vote counting in US midterm elections in key states like Georgia.

Many of those efforts -- including one backed by former Trump National Security Adviser Mike Flynn and Overstock.com former Chief Executive Officer Patrick Byrne to toss 37,500 voters from the rolls in a Democratic Atlanta suburb -- have sprung up within the 90-day freeze on voter purges under the 1993 National Voter Registration Act.

As of late August, more than 65,000 voter registrations have been challenged in several Georgia counties, including its most Democratic ones -- far more than the 11,000-vote margin President Joe Biden won there in 2020.

That, as well as challenges in Iowa, Michigan, Florida and Texas, has prompted the Brennan Center for Justice at New York University and the Campaign Legal Center to warn Georgia officials that canceling any voter registrations this close to the November midterms would be illegal. Voting rights groups are considering a legal challenge.

The mass voter challenges in Georgia are allowed under a 2021 state law enacted after Trump’s baseless claims that widespread voter fraud led to his defeat. That law allows anyone to challenge an unlimited number of voters’ eligibility and also allows the state to take over local elections boards they have has trouble administering the election or counting the vote.

If the voter registration challenges proceed within the 53 days left before the midterm elections, it could lead to a chaotic Election Day in a state that is critical to determining which party controls the US Senate. Voters could submit ballots only to find that they either can’t vote or have to cast a provisional ballot that could still be rejected.

Georgia was the epicenter of Trump’s efforts to undermine elections since he lost the state in 2020. Governor Brian Kemp and Secretary of State Brad Raffensperger, both Republicans, opposed Trump’s efforts to overturn his loss, but they supported the 2021 law.

Mike Hassinger, a spokesman for Raffensperger, acknowledged that federal law bars systematic purges of voter registrations within 90 days of an election but said that people who are no longer eligible to vote can still be removed on a case-by-case basis.

Aunna Dennis, executive director of Common Cause Georgia, said that voters whose registration has been challenged will face different outcomes depending on their county.

“Counties are not getting proper guidance from the state on how to handle these mass challenges,” she said.

Gwinnett County, which Biden carried with 58.4% of the vote in 2020, has seen the most challenges from VoterGA, a group backed by Flynn and Byrne. Challenges to voter registrations also popped up in four other large, Democratic metro Atlanta counties, as well as in the Democratic county that includes Savannah and a handful of smaller, Republican counties.

“The intent of the project is to remove invalid voter roll entries -- not valid voters,” said Garland Favorito, co-founder of VoterGA.

Under the rules set by the 1993 federal law, local elections officials typically clean up voter rolls starting in the January after an election year to avoid mistakenly canceling a valid registration just before voting begins.

In Georgia, the process can take as long as nine years, as voters are only marked inactive after they have failed to vote in two consecutive elections and don’t respond to a postcard sent by elections officials, and then only canceled if they are not responsive for another four years.

Sean Morales-Doyle, acting director of the voting rights program at the Brennan Center, said the mandatory 90-day freeze protects the rights of voters to fix any mistakes before Election Day. He said the VoterGA and other challenges are based on unreliable data. The Brennan Center and the Campaign Legal Center have warned the counties not to remove voters this close to Election Day.

“You can’t get around that protection by having a vigilante citizen deciding that they are going to be the ones presenting the evidence and making the challenges,” Morales-Doyle said.

Despite the warnings, Forsyth County, where Republicans outnumber Democrats two-to-one, kicked 95 of 211 challenged voters off the rolls last week.

Officials are in a bind if they don’t respond to the challenges. Under the same 2021 law, the State Election Board can launch a performance review of county election offices if state lawmakers from the area complain that it’s not well-run. That process can lead to the state board, run by a Kemp appointee, taking over a local elections office.

Gwinnett County had to assign 10 staffers to sift through eight boxes of challenges that arrived at the board of elections on Aug. 29.

In Northwest Georgia’s Chattooga County, elections officials refused to consider a request that it kick off every registered voter.

In Iowa, Joel Miller, the Linn County auditor and the Democratic nominee for Iowa secretary of state also received challenges. Many of the complaints appear to be about people who moved away and would have been taken off the lists starting in January anyway for being inactive, he said.

“They’re creating a lot of work over nothing, really,” Miller said. “If I spend 10 minutes per challenge, it would take me three days to go through all of these.”