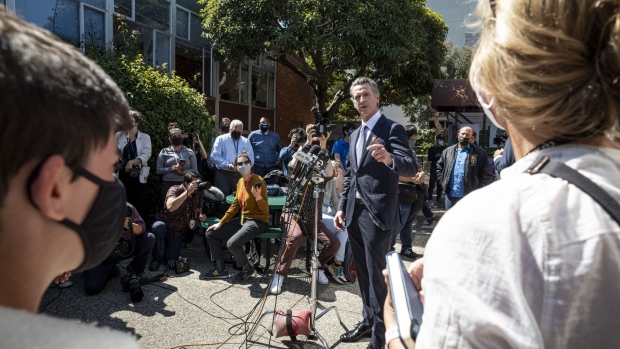 (Bloomberg) -- California voters went to the polls Tuesday to decide whether Gavin Newsom should be the state’s second-ever governor to be ousted from office in a recall.

Voters face two questions: Should the first-term Democrat be removed, and if so, who should replace him? A simple majority of yes votes on the first question is required for his ouster, and if that occurs, the candidate with the most votes on the second wins.

At stake is the top job in the world’s fifth-largest economy and a U.S. leader in progressive policies. While polls show Newsom likely to win, a potential loss and replacement by a Republican would be a blow to President Joe Biden’s agenda and for Democrats heading into the 2022 midterm elections.

Polls close at 8 p.m. local time. The speed in declaring an outcome depends on the counting of mail-in ballots, which every registered California voter received. Democratic voters, who outnumber Republicans by almost 2-to-1, have said in polls they are more likely to cast their ballot by mail or drop-off, while those in the GOP are more apt to vote in person.

About 9.4 million ballots for the election have been returned as of midday, or about 42% of the total mailed, according to research firm Political Data Inc.

Registered Democrats have returned roughly half of those ballots -- 4.8 million -- while independents account for 2.1 million. Republicans have returned almost 2.5 million.

Newsom, a former San Francisco mayor, made an appearance in the city on Tuesday to rally voters and make a last-ditch effort to get people to vote “no” on the recall.

“We can’t allow the economy, not just our public health, to be impacted by a wrong decision tonight at 8 o’clock,” he said, according to the Los Angeles Times. The governor also blasted Republican claims of voter fraud, saying it is a “crock.”

With polls showing Newsom ahead, some Republicans have turned to promoting voter fraud in the heavily Democratic state. Conservative radio host Larry Elder, the leading candidate to replace Newsom, had a link on his website Monday saying fraud had been detected before the results were even in. It has been replaced with a section to report fraud.

Former President Donald Trump, who promoted baseless conspiracy theories in the 2020 presidential election, weighed in Tuesday to say the recall is “totally rigged,” without offering any evidence.