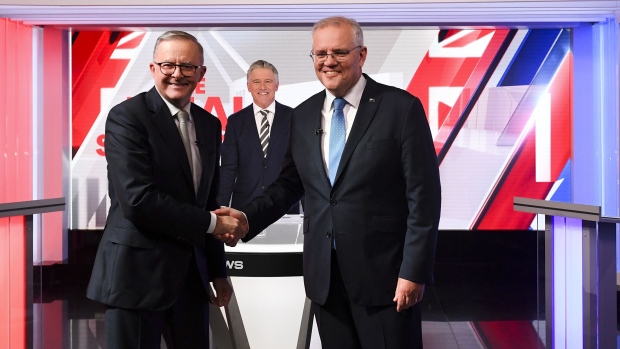 However neither party is making predictions, bearing in mind Prime Minister Scott Morrison’s upset win in 2019 when he beat the Labor Party despite trailing them in the polls. This time, his coalition has also been behind the Labor Party in opinion surveys throughout the six-week campaign as voters were largely disgruntled with his handling of the pandemic and the rising cost of living.

The gap narrowed in the last stretch of the campaign as Morrison has appealed to Australians to give his government a fourth term in office, asking them to consider the country’s strong economic growth and record-low unemployment while positioning himself as the only one tough enough to stand up to China.

His main rival and Labor Party Leader Anthony Albanese has also taken a tougher China policy to mirror Morrison. At the same time, Albanese’s campaign has trained its focus on inflation rising at a faster clip than wages, claiming Australian has a “cost of living crisis.”

Polling centers open Saturday morning at schools, community halls and places of worship. Voting is mandatory in Australia and several institutions will sell sausages and cakes to citizens as they wait in line to cast their ballot.

The Australian Electoral Commission said a shortage in staff may see some polling stations unable to open in Queensland, Western Australia and South Australia   though the vast majority of 7,000 centers will be accessible.

Last Survey Before Polls Shows Labor Ahead of the Liberal Nationals (8:36 p.m.)

A final Newspoll survey published in The Australian newspaper on Friday found Labor with lead over the government of 53% to 47%. If this was replicated on election day, Albanese would get elected prime minister with about 78 seats in the 151-member legislature.

When voters were asked who they preferred as prime minister, Albanese drew level with Morrison for just the second time in the past three years.