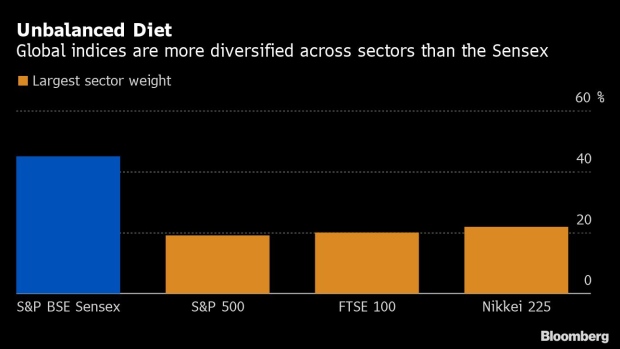 Financial stocks account for nearly half the value of benchmark S&P BSE Sensex and have been among the biggest drag on the gauge since it hit a peak in June. State Bank of India has been the biggest hindrance among stocks that have had the most negative influence, according to data compiled by Bloomberg.

“Most investors would welcome the idea of sector-specific caps,” said Gaurav Sinha, associate director for asset allocation at WisdomTree Investments in New York. “It’s a way to mitigate risks.” Wisdomtree’s $1.2 billion India Earnings Fund doesn’t allocate more than 30% to any one industry, he said.

Financials, whose weighting in the Sensex has more than doubled in the past decade, have seen sharp erosion in their share prices in wake of the yearlong crisis in India’s credit markets. Yes Bank Ltd. has slumped more than 70% this year, the worst performer on the gauge, and Indiabulls Housing Finance Ltd. was removed from the NSE Nifty 50 Index last month after the mortgage lender’s value more than halved.

Introducing a cap on sector weighting is an idea the National Stock Exchange of India Ltd. floated early this year, stirring a debate. Asia Index Pvt., a venture between BSE Ltd. and S&P Dow Jones Indices LLC, independently said sector-wise caps for benchmark gauges will hurt products linked to such indexes, in addition to increasing trading time and costs.

To be sure, most benchmark indexes globally don’t limit the influence of industry groups. Curbs could stop the indexes from reflecting the dynamics of the underlying economy, said Hemant Kanawala, head of equity investment at Kotak Mahindra Life Insurance Co.

“The risk is there, but artificial constraints may not be the right answer,” said Kanawala. “One way could be to change the index methodology; that would be less distortive and would still allow the market to decide.”

To contact the reporter on this story: Ronojoy Mazumdar in Mumbai at rmazumdar7@bloomberg.net

To contact the editors responsible for this story: Lianting Tu at ltu4@bloomberg.net, Margo Towie, Ravil Shirodkar