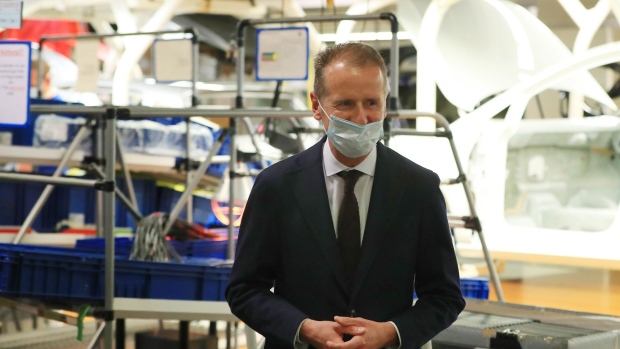 While VW has a “healthy order bank” and remains confident on sales in the coming weeks, its development depends on major economies controlling the disease and averting restrictions that would hurt demand and the company’s operations, Diess said Thursday.

“A second wave which would lead to a further lockdown would really be difficult to manage,” the CEO said during a Bloomberg online event. “In the long run, climate change will be the biggest challenge mankind is facing.”

The German automaker swung back to profit in the third quarter, echoing robust results from peers including Daimler AG, Tesla Inc. and Ford Motor Co. as a swift demand recovery in China helps the industry navigate the Covid-19 pandemic. But another wave of new infections in key markets, an unsettled U.S. election and Britain’s messy exit from the European Union are now among the risks to further economic stabilization.

Diess, 62, will face perhaps the most complex task of any CEO leading the rapidly changing car industry into the post-pandemic world. He’s tried to create a new culture at the 83-year-old industrial behemoth, putting as much emphasis on technology and software chops as manufacturing prowess. Pulling that off has been made all-the-more challenging by divisions within VW’s supervisory board and powerful works council that publicly clashed with the former BMW AG executive earlier this year.

Diess has boosted efforts to rein in costs at VW’s namesake passenger-car brand and embarked on an aggressive plan to build the industry’s largest electric-vehicle lineup. While incumbent automakers wrestle with overhauls of their legacy operations, Tesla has surged ahead to become the world’s most-valuable car manufacturer, even as it generates far less cash and sells fewer vehicles than VW or Toyota Motor Corp.

That puts VW under pressure to keep pace with technology development, even as the pandemic roils day-to-day business.

“If you’re not fast enough, you’re not going to survive,” Diess said.