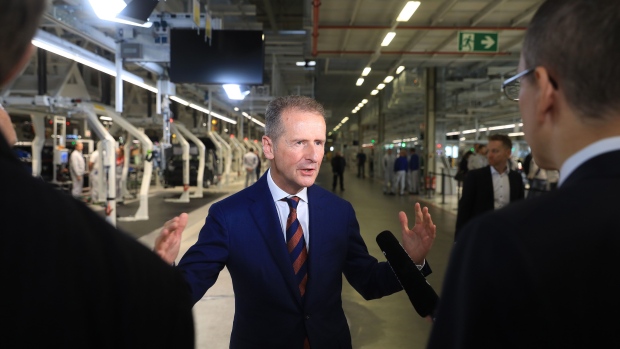 Tensions at the top of Volkswagen AG over an attempt to radically transform the world’s largest carmaker spilled over into the public, with the chief executive officer taking a public swipe at his opponents within the company.

In a German business newspaper op-ed, Herbert Diess likened VW to a “tanker” at a time when automakers’ survival depends on quickly pursuing electrification and digitalization. He wrote that the company is highly influenced by labor unions who sometimes have different interests than shareholders.

“When I took office in Wolfsburg, I had firmly resolved to change the VW system,” Diess wrote Friday in Handelsblatt. “That means: breaking up old, encrusted structures and making the company more agile and modern. Together with many companions with the same level of motivation, I have succeeded in doing this in many places, but not in some, especially not yet at our corporate headquarters in Wolfsburg.”

The latest call to speed up VW’s overhaul reflects how much of a challenge it’s been for Diess, 62, to push through more dramatic reforms. He’s struggled to win support from key stakeholders for his picks to fill top executive posts, people familiar with the matter said earlier this week, and bristled at the slow progress the company has made untangling its conglomerate structure and narrowing its focus to key brands.

The comment about persistent inefficiencies at VW’s headquarters echoes remarks supervisory board member Wolfgang Porsche made at the Geneva auto show last year, which disgruntled labor representatives. In a rare moment of candor, the leader of VW’s reclusive owner family criticized the amount of sway unions have over the company.

Diess wrote that VW’s management is “conditioned on internal competition, shaped by Ferdinand Piech,” referring to Wolfgang Porsche’s deceased cousin who shaped the industrial giant over two decades as CEO and chairman. He said the company’s scale, history and prowess at engineering and manufacturing traditional vehicles don’t protect the organization from disruption and “can even turn into a burden in a time of dramatic change.”

The changes sweeping the auto industry “will happen in the next ten years, with our without Volkswagen,” Diess wrote.

Diess has mounted an aggressive push into electric vehicles that analysts see becoming a competitive advantage, but his hard-nosed management style has ruffled feathers across the organization. He joined VW from BMW AG five years ago and pushed aside several executives in a sweeping shakeup of management this summer.

Renewed infighting with unions could bog down VW’s efforts to challenge Tesla Inc.’s electric-car leadership by spending a record 73 billion euros (US$87 billion) on technology over the next five years.

Diess has repeatedly clashed with VW’s unions that often are backed by the German state of Lower Saxony, the company’s second-largest shareholder with a 20 per cent stake. The board took away the CEO’s direct control of the namesake VW brand in June following a dust-up over his request for a contract extension and other issues.