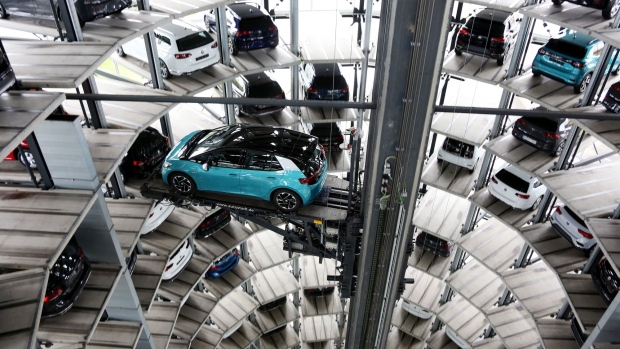 Bloomberg Best of the Year 2020: A new Volkswagen AG (VW) ID.3 electric automobile inside one of the automaker's Autostadt delivery towers at the VW headquarters in Wolfsburg, Germany, on Monday, Oct. 26, 2020. Photographer: Liesa Johannssen-Koppitz/Bloomberg , Bloomberg

(Bloomberg) -- Volkswagen AG has lost tens of thousands of cars in production in China due to the global chip supply shortage that’s crippling automakers around the world.

“It was hurting us already in December and we lost some 10,000 cars since then simply because we lost 50,000 cars in production in December because of some chips,” VW’s China head, Stephan Wollenstein, said in an interview on Wednesday.

Wollenstein said the chip shortage mainly impacted models using the carmaker’s Electronic Stability Program, a system of sensors that works with a car’s Anti-lock Braking System to prevent the wheels locking up after an unexpected swerve.

“You see how vulnerable our industries are if only one chip is missing,” Wollenstein said. “This will unfortunately continue in the first quarter.”