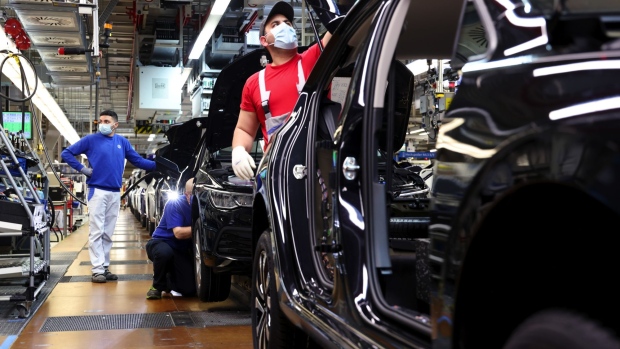 (Bloomberg) -- Volkswagen AG is overhauling its main factory in Germany to make two additional battery cars as Europe’s biggest automaker tries to get its electric shift back on track.

VW will assemble a revamped version of the ID.3 hatchback at its Wolfsburg site starting next year and a new electric sport utility vehicle sometime after late 2025. The decision to make two more battery-powered models at the facility casts doubt over an earlier plan for a new €2 billion EV plant nearby.

“We intend to bolster the competitiveness of this factory further and give the workforce a concrete long-term perspective,” Thomas Schaefer, who heads the company’s main VW brand, said in a statement on Wednesday.

Chief Executive Officer Oliver Blume is under pressure to turn around VW’s EV push, which has been plagued by internal discord and software fumbles that delayed the launch of key Audi and Porsche models. Blume has been reevaluating some of the strategies set out by his predecessor Herbert Diess, who pushed for projects at an ambitious speed and brushed over internal in-fighting in a bid to catch up with Tesla Inc.

Fixing the software issues is among Blume’s most pressing tasks since he took over in September. The CEO plans to push back the key Trinity electric-car project by at least two years because of software delays, Bloomberg reported last month. It remains unclear if VW will go through with plans to build the new EV factory in Wolfsburg, for which construction was due to start next year. VW is spending €460 million by early 2025 to retool its existing plant in the city.

The Trinity project “will get underway in line with staggered software development,” VW said in the statement. “A decision on where the vehicle will be built in Wolfsburg has not yet been taken.”

The developments are a sobering reminder that the industry is in the midst of a challenging transition. VW, BMW AG and Mercedes-Benz AG are pouring more than €100 billion into scaling up an entirely new infrastructure of assembly platforms, battery plants and software to deliver a new generation of EVs. The hope is that these will lead on driving range as well as digital offerings.

Blume plans to present a status update on his plans for a more realistic software rollout to the supervisory board on Dec. 15, people familiar with the deliberations said. The speed with which VW’s Cariad unit can develop different software platforms will determine which EVs can be built in which factories, the people said, asking not to be named because the discussions are private.

“Volkswagen’s bureaucracy and complexity is clearly a big obstacle for good execution,” said Patrick Hummel, an analyst at UBS. “They need to revisit what is realistic for them — otherwise your going with an overconfident strategy in a high-risk, highly uncertain time.”