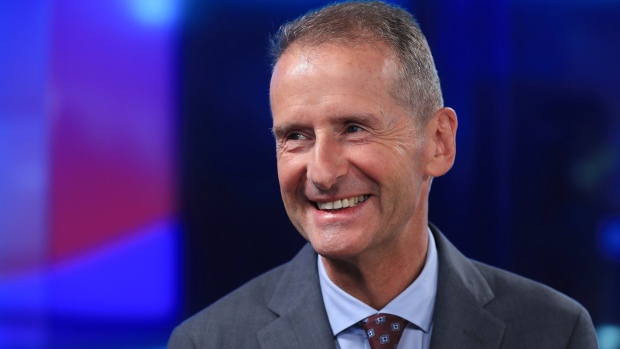 A few months ago, the head of Volkswagen’s American business, Scott Keogh, approached CEO Herbert Diess with an idea to gain market share in the US.

Keogh proposed that VW revive Scout, a dormant off-road vehicle brand the automaker acquired rights to when it bought truck manufacturer Navistar last year. The plan is to better compete in the lucrative US pickup and SUV segments with an American badge instead of a German one, and have an answer for electric up-and-comers like Rivian.

“From the beginning, I found that very very promising and exciting,” Diess said in an interview with Bloomberg Television’s Matt Miller last week. “We need to become more American.”

Matt referred to Scout as “American like baseball and apple pie,” but to be honest, the first thing I did after VW announced it was bringing back the brand was go to Google. I had never heard of it.

I learned Scout vehicles competed with the Ford Bronco as well as models from Land Rover and Jeep in the two decades before the business ceased production in 1980, the year I was born. While the chunky off-roaders may have been popular with baby boomers, VW will have some work to do schooling more consumers my age and younger to build recognition of this brand after such an extended absence.

Don’t get me wrong — I’m partial to retro revivals and can understand the motivation behind this move. Scout has somewhat of a cult following because it made rugged SUVs before rugged SUVs were a thing. VW’s main brand took a reputational beating from the automaker’s diesel-emissions scandal, so Scout will enable the Germans to start over with a clean slate. Diess no doubt followed what the the late Sergio Marchionne accomplished with Jeep and Ram, the two linchpins of his turnarounds of Chrysler, and sees a path to replicating that success.

But bringing back Scout also goes against some of Diess’s own preaching. The CEO has vowed to make the German behemoth with 10 different brands leaner to better compete with the likes of Rivian and Tesla. So why set up another independent company, managed by yet another new team, adding even more models and organizational bloat?

VW is also running a bit late: it plans to unveil Scout pickup and SUV prototypes next year and begin production in 2026. That will be years behind similar models from Ford and General Motors, not to mention the all-electric brands.

Diess wants to more than double VW's market share in the US to 10%, but this won’t be easy. Japanese automakers’ efforts to ding Detroit’s dominance of pickups have largely failed, with Toyota’s Tundra and Nissan’s Titan never coming close to the volumes mustered by Ford, Chevrolet and Ram.

The Wall Street Journal reported that VW intends to invest more than $1 billion to ready this project, and that the company is open to external investors and may eventually even take it public. I can’t help but feel VW is building another Rivian at a time when Rivian itself is suffering a crisis of confidence.

Diess acknowledged all this, but said reviving Scout was simply too promising an opportunity to pass up. “This is just so attractive and such a precious brand and such an attractive segment that I said wow, we should do that.”