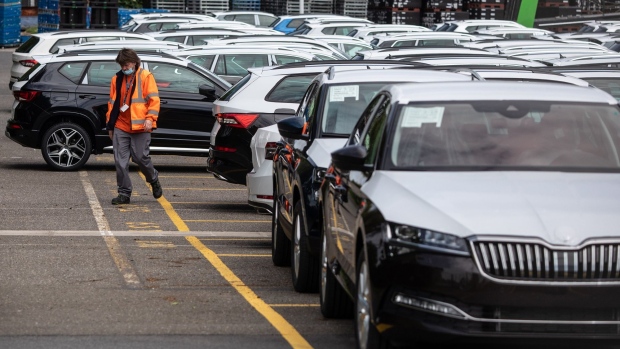 An employee wears a protective face mask while passing new Skoda Superb hybrid automobiles in a storage yard outside the Skoda Auto AS factory, operated by Volkswagen AG, in Kvasiny, Czech Republic, on Tuesday, June 9, 2020. Across the 12-brand group, Volkswagen plans to invest 33 billion euros ($37.5 billion) by 2024 in a push to become the worlds largest electric-car maker, including 11 billion euros alone for the VW brand. , Bloomberg

Volkswagen AG’s Skoda unit will produce 250,000 fewer cars than planned this year due to the global chip shortage, Automobilwoche magazine reported, more than double the number that the company estimated last month.

Most working shifts were canceled until the end of the year as Skoda still holds a large number of unfinished cars in stock and will focus on completing those first, the magazine said, citing the head of the company’s workers council.

The chip shortage might last until the second half of 2022 before stabilizing again as the latest rise in Covid cases in Asia pressures production, Automobilwoche cited company officials as saying.

Skoda Chief Executive Officer Thomas Schaefer said in September that he expects the company to produce 100,000 fewer cars than planned.

VW, Daimler AG’s Mercedes and Toyota Motor Corp. are among automakers that have been hit by factory shutdowns in southeast Asia, which in recent years has emerged as a hub for chip testing and packaging.