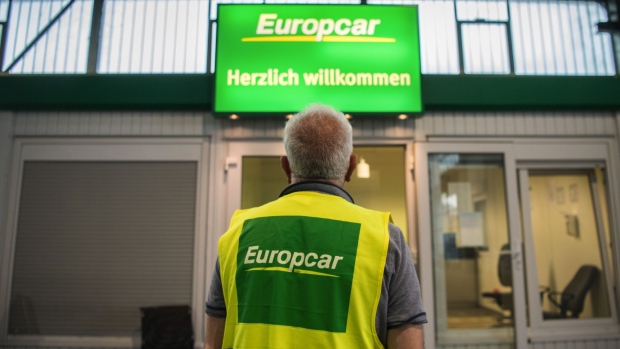 An employee beside a customer service cabin at a Europcar Mobility Group automobile rental depot in Hamburg, Germany, on Tuesday, June 29, 2021. Volkswagen AG confirmed it’s considering an acquisition of a majority stake in Europcar to expand its offerings of mobility services. Photographer: Stefanie Loos/Bloomberg , Bloomberg

(Bloomberg) -- Volkswagen AG is moving closer to a deal to buy Europcar Mobility Group after gaining support from the car rental firm’s hedge fund backers with a sweetened offer, according to people familiar with the matter.

A consortium led by the German carmaker increased its offer for Europcar to around 50 euro cents per share, or around 2.5 billion euros ($3 billion), the people said, asking not to be identified discussing confidential information.

While an agreement could be reached as early as this week, terms could still change and talks may also be delayed or fall apart, the people said. Negotiations are particularly complex given there are about 10 different stakeholders involved, including more than half a dozen hedge fund investors in Europcar, they said.

VW’s previous offer with its partners Attestor Ltd. and Pon Holdings BV of 44 euro cents a share was rejected about a month ago by Europcar as too low. A bid of 50 cents a share would be a premium of 27% to Europcar’s share price on June 22, the day before Bloomberg News first reported on the initial bid.

VW is interested in gaining access to Europcar’s infrastructure and technology in a bet on the future of mobility services. While demand for rental cars has recovered as governments loosen virus-related restrictions, companies in the sector face long-term challenges from newer entrants offering ride-hailing and car-sharing.

Representatives for Europcar and VW declined to comment, while spokespeople for Anchorage, Attestor, Marathon and Pon couldn’t be immediately reached for comment.

If a deal is agreed, it would mark a reversal of sorts. VW took over Europcar in the late 1990s, then sold it to buyout firm Eurazeo SE in 2006 for 1.26 billion euros.

Late last year, Europcar agreed to a debt restructuring and capital increase that wiped out more than 1 billion euros of debt and handed control of the company to several hedge funds including Anchorage Capital Group and Marathon Asset Management.