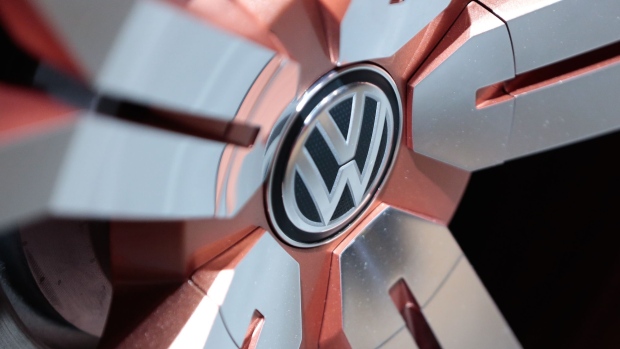 Newly assembled Volkswagen e-Golf electric automobiles stand in a light tunnel during quality checks at the Volkswagen AG factory in Dresden, Germany, on Friday, May 29, 2020. Even before the coronavirus crisis, automakers had to contend with an extended downturn in China, the world’s biggest auto market, where about half of all passenger electric vehicles are sold. Photographer: Krisztian Bocsi/Bloomberg , Bloomberg

Volkswagen AG has started assembling cars in Ghana following a partial government ban on imports of used cars that is part of policy measures to turn the country into an automotive hub for West Africa’s 380 million people.

The German carmaker will initially assemble vehicles through a local partner, Universal Motors Ltd., Thomas Schaefer, head of Volkswagen sub-Sahara region said at a launch event Monday. The facility targets fully installed capacity of 5,000 cars a year, he said through a videocall.

“Once the policy has been fully implemented and elements such as vehicle financing are in place,” Ghana will have a capacity for 300,000 new cars a year, Volkswagen Ghana Chief Executive Officer Jeffrey Oppong Peprah said at a launch event Monday.

Nissan Motor Co., Toyota Motor Corp., Suzuki Motor Corp. and Renault SA are among automakers weighing the local assembly of vehicles in a country where used cars make up about 70% of vehicle imports. Ghana, which prohibited the importation of used cars older than 10 years old in May, wants to leverage a continental free-trade agreement to become West Africa’s manufacturing hub.

While the African Continental Free Trade Area agreement legally entered into force last year, commerce due to have started on July 1 has been delayed as the coronavirus pandemic set back negotiations for trade in goods, including tariff concessions. When fully operational by 2030, AfCFTA could be the world’s biggest free-trade zone by area, with a potential market of 1.2 billion people and a combined gross domestic product of $2.5 trillion.

Vehicles are among the top elements of Ghana’s import bill of about $12 billion, Trade Minister Alan Kyerematen said at the launch. “There’s absolutely no doubt that this effort is going to help us save scarce foreign-exchange resources,” he said. “It is also creating an opportunity for us to earn significant amounts of foreign exchange.”