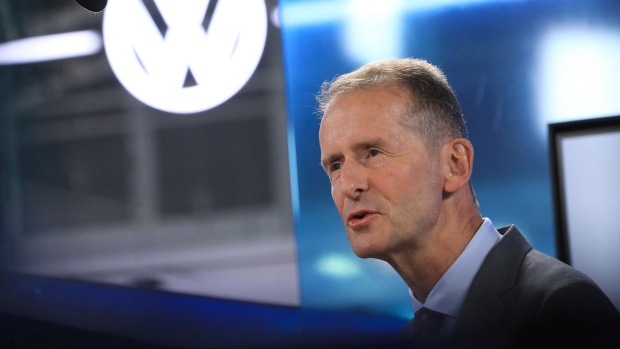 Volkswagen AG maintained its margin forecast even as severe supply strains on semiconductors prompted a slump in production and a decline in profit during the third quarter.

“The results of the third quarter show once again that we must now systematically drive forward the improvement in productivity in the volume sector,” Chief Executive Officer Herbert Diess said in a statement. “We are determined to maintain our strong position against established and new competitors.”

Like other carmakers, VW has navigated the chip crisis by focusing production on its most lucrative models to keep up returns with the Porsche and Audi luxury brands. Sustaining profit is vital for VW to bolster the industry’s most ambitious electric-car rollout plan and stand a chance of closing in on Tesla Inc.

The carmaker’s volume brands, like the VW namesake marque, recorded losses during the quarter, the company said.

VW’s main factory in Wolfsburg, the world’s largest car plant, faces an order backlog of more than 130,000 Golf models, worker representatives said this month. That equals roughly four months of production and comes on top of 110,000 orders for the brand’s bestselling Tiguan SUV, they said.

Supply disruptions will weigh more heavily on margins at VW than on those of German peers Daimler AG and BMW AG due to higher costs, Sanford Bernstein analyst Arndt Ellinghorst said in a report this month. VW’s fixed costs at more than 30% of revenue, compared with about 25% for its peers, he said.

VW is targeting an adjusted operating profit margin between 6% and 7.5% this year after generating 11.4 billion euros in profit in the first six months. That’s more than the 10 billion euros profit it made in all of 2020 when the Covid-19 pandemic emptied showrooms and factory floors.