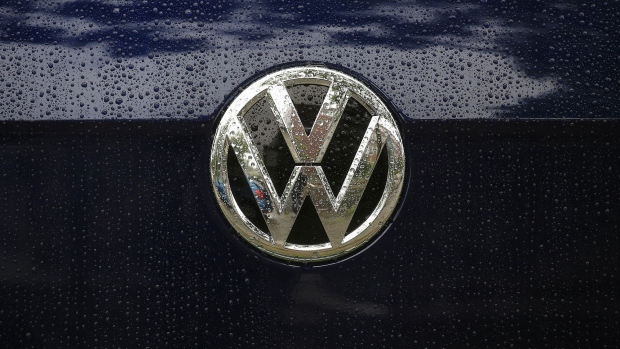 Raindrops rest on the badge of a used Volkswagen Golf automobile outside a Volkswagen AG (VW) showroom in Berlin, Germany, on Wednesday, July 26, 2017. Carmakers' shares have dropped since Spiegel magazine reported Friday that Daimler and Volkswagen informed authorities last year of discussions they'd had since the 1990s that also included BMW AG. Photographer: Krisztian Bocsi/Bloomberg , Bloomberg

The division will generate an operating profit of 4 billion euros ($4.8 billion) already this year rather than in 2025, according to Chief Financial Officer Frank Fiedler. First-half results rose to a record after the semiconductor shortage disrupted production of new cars, shifting demand to pre-owned vehicles.

“Fairly new used cars are in demand, meaning we’re getting higher prices for them than planned,” Fiedler said in an interview. “Certain used cars are going to go back into another leasing cycle because we don’t have new cars available for our customers.”

Volkswagen Financial Services, one of the world’s largest automotive captive-finance companies and a stable source of income for the German industrial giant, is seeking to keep up the momentum even as the effects brought on by the pandemic and the chip crunch wane. It plans to overtake LeasePlan Corp NV and ALD SA to become Europe’s biggest fleet manager and centralize used-car marketing in the region.

The business last year boosted provisions for potential credit defaults due to fallout from the pandemic by about 500 million euros -- a figure that remains on its books. But far fewer customers than expected have fallen behind on payments, Fiedler said.

A VW-led consortium reached a deal to buy French car-rental firm Europcar Mobility Group for 2.51 billion euros last month as the automaker plans to expand its suite of mobility services. With the takeover not yet finalized, no decisions have been made on how the two businesses’ offerings will coexist, Fiedler said.