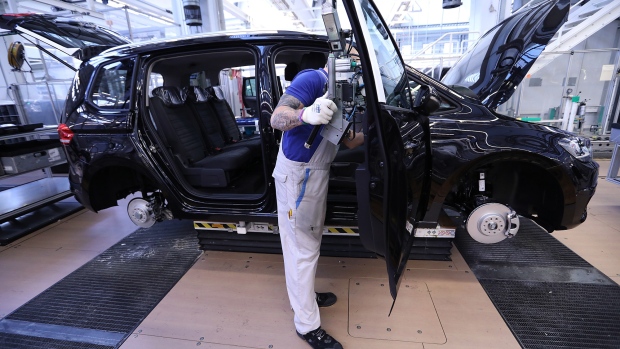 A worker fits a door to a Volkswagen Touran Sport Utility Vehicle (SUV) on the assembly line at the Volkswagen AG (VW) factory in Wolfsburg, Germany, on Tuesday, Oct. 30, 2018. VW has managed one of the more confident outlooks in an otherwise gloomy reporting season for carmakers and suppliers. , Bloomberg

Volkswagen AG is reworking its battery-purchasing plan worth about 50 billion euros (US$56 billion) over concerns a supply deal with Samsung SDI Co. Ltd. might unravel, according to people familiar with the matter.

Samsung initially agreed to deliver batteries for just over 20 gigawatt hours, enough to power 200,000 cars with 100 kilowatt hour packs, before different views on production volume and schedule emerged during detailed negotiations, said the people, who asked not to be identified as the talks are confidential. The impasse cut pledged supplies to less than 5 gigawatt hours, they said.

“Samsung continues to be our battery cell supplier for Europe,” VW said in an emailed statement. Samsung declined to comment.

Access to vast amounts of batteries to power a growing number of electric vehicles has emerged as a new battleground for global automakers amid capacity constraints, supply bottlenecks and limited access to raw materials. Producing batteries safe to use in cars is more complex compared to technology that’s used in consumer electronic devices like smartphones.

Tesla, beset by concerns over demand and its ability to make a profit, last month accused its battery supplier Panasonic Corp. of being the culprit for tepid production rates of the affordable Model 3.

Earlier this month, VW outlined a project to build a domestic battery-cell factory in Germany together with Swedish startup Northvolt AB for almost 1 billion euros with capacity of 10 gigawatt hours. VW plans to take a final decision later this year.

VW’s electric rollout in the next ten years translates into battery demand of more than 300 gigawatt hours in Europe and Asia alone, outstripping current market capacities.

VW has picked LG Chem Ltd., Samsung and SK Innovation Co. as battery suppliers for Europe along with Contemporary Amperex Technology Co. for China. It later added SK Innovation as partner for North America as well, starting in 2022.

The huge investments required to ramp up battery-production capacity have stoked intense rivalry, highlighted by a lawsuit LG Chem filed in the U.S. against SK Innovation over allegedly stealing secrets.