After a decade of middling wage growth, Canadian workers are finally starting to see significantly bigger paychecks. The question is whether those gains are sustainable.

Wages have risen upwards of four per cent annually in recent months by some measures, the fastest pace since 2009. This would typically be a strong signal of health in the nation’s economy and foster confidence in future growth.

But another indicator is prompting economists to worry the wage gains may soon reverse course. Productivity figures have barely budged and remain little changed from two years ago.

Those two measures of the economy can only diverge for so long before companies either curtail output or raise prices to pay for the higher wages.

There are optimists, including Bank of Canada Governor Stephen Poloz, who believes conditions may be ripe for a pickup in productivity. For example, a tightening labour market is giving workers confidence to seek jobs that better match their skills, a development that should raise productivity levels in the economy, according to the central banker.

“The average wage increase of people who switch jobs is very high, in the 10 per cent to 12 per cent range because people are finding the right matches. Those matches inevitably bring higher productivity,” Poloz said at a press conference in Toronto last week. “I’m expecting the statisticians to find more productivity as we go along and kind of square that circle.” 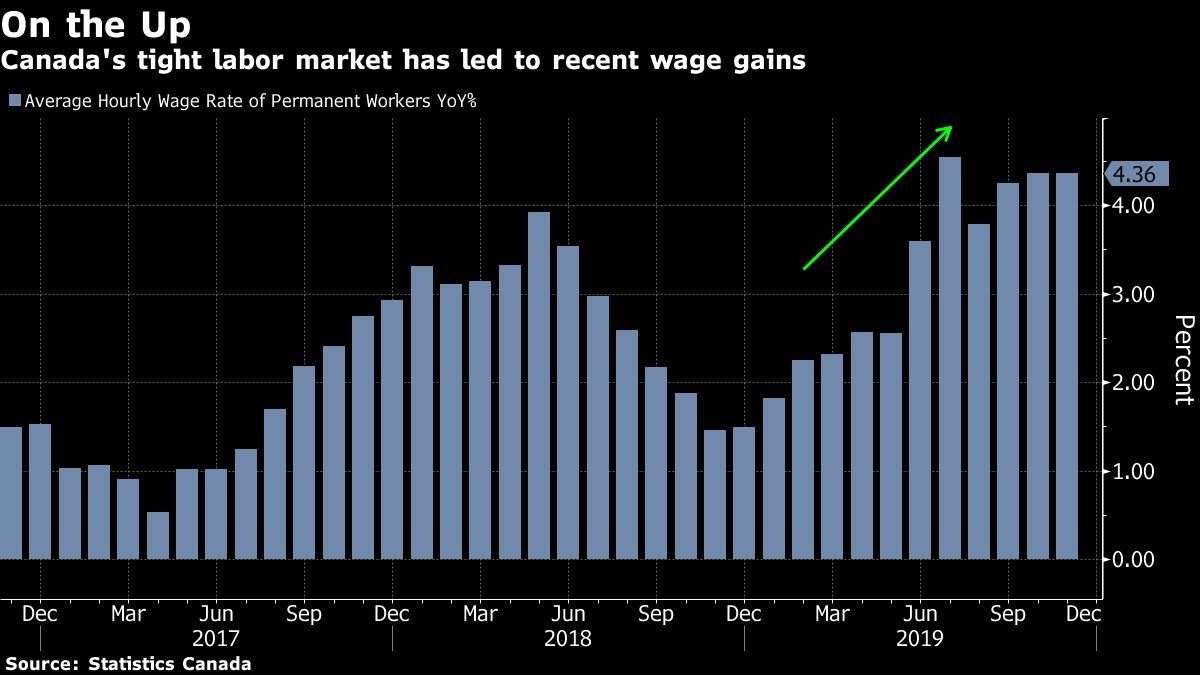 Other economists are reluctant to bank on improved productivity any time soon.

For one, there’s no short-term fix to a problem driven by structural forces. These include Canada’s industry makeup, which skews more toward small businesses that are typically less productive than larger firms, and a weakening energy sector that typically has high productivity due to its capital-intensive nature.

“One of the big pushes for productivity has come from the energy sector and that looks like that’s not really a logical pathway for strong growth going forward,” Caranci said. It’s hard to imagine what industry could step in and fill that gap, she added.

And while economists credit global trade tensions with creating some uncertainty in business investment, it doesn’t explain the historically low trend.

That means recent pay increases may simply end up eating into corporate profits.

“Without productivity growth it could mean employers say labor costs are too high and they start cutting back on their demand for labor,” said Brendon Bernard, an economist at Indeed Canada. That in itself would moderate wage pressures, “but it would also mean Canadian workers don’t feel that they’re getting ahead.”