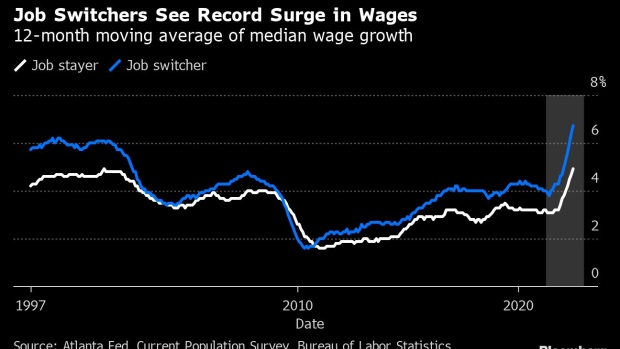 (Bloomberg) -- Job hoppers have long scored bigger raises than those who stay, but the gap is getting even wider.

People who switched saw their wages jump by a record 6.7% on average in the 12 months through July, nearly two percentage points higher than those who remained in their same roles, according to calculations by the Federal Reserve Bank of Atlanta. That’s the widest gap in records back to late 1997.

Job stayers -- defined as someone who’s stayed in the same industry in the last year, or hasn’t changed employers or job duties in the past three months -- saw their wages increase 4.9% over the same time period, matching a series high last seen in 2001.

Read more: Quitting to Get a Raise Worked for Most People Who Switched Jobs

Employers across the nation have been bidding up wages in an effort to attract and retain applicants. And while job openings have eased in recent months, they remain near historic highs. That means a lot of opportunities for workers in search of something better -- whether they already have a job or not.

The widening gap between wage gains for those who stay at their jobs compared to those who leave could fuel even more turnover in the labor market as Americans struggle to keep pace with the crushing weight of inflation. If labor demand holds up, that could mean even higher wages, something that could further complicate the Fed’s fight to curb price pressures.