The disconnect between wage growth and inflation is being put under the microscope by the chief economist of BMO Capital Markets.

In a short note to clients, Doug Porter pointed out that wages are only rising around three to 3.5 per cent year-over-year, less than half the rate of Canada’s “steaming” (in Porter’s words) cost of living after Statistics Canada’s consumer price index surged 6.7 per cent year-over-year in April. He described the gap between those two metrics as “simply unsustainable,” particularly given Canada’s tight labour market.

“Either inflation will need to moderate, and soon, or else wages are poised to play catch-up, big-time,” Porter wrote. 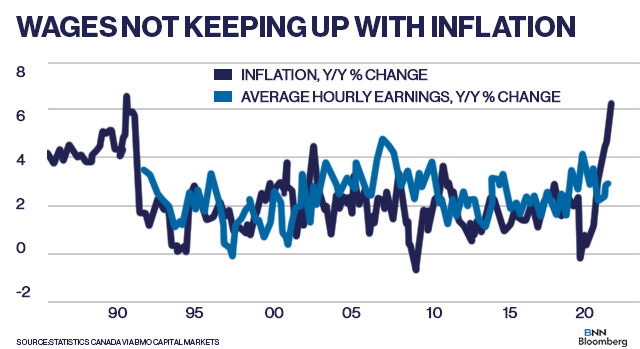 Porter is one of many Bay Street voices sounding the alarm on inflation that’s racing further and further away from the Bank of Canada’s target range of one to three per cent.

Scotiabank Head of Capital Markets Economics Derek Holt said on Wednesday he thinks there’s a “solid case” for the Bank of Canada to hike as much as full point “in one shot.”