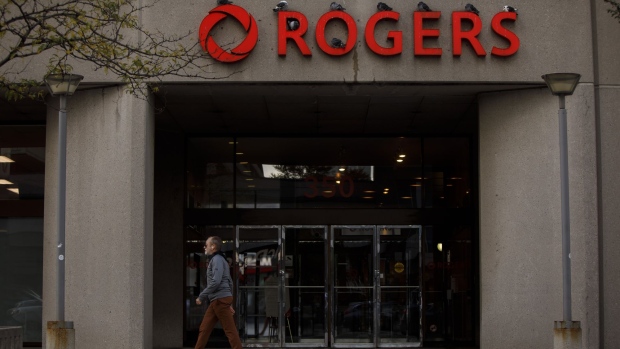 Rogers headquarters in Toronto, Ontario, Canada, on Friday, Oct. 22, 2021. Edward Rogers defeated an effort to limit his voting power at Rogers Communications Inc., paving the way for his extraordinary attempt to replace five directors on the company’s board with his allies. , Bloomberg

(Bloomberg) -- The family power struggle engulfing Rogers Communications Inc. has made the shares cheap, but investors should wait for the drama and uncertainly to die down, says the head of Toronto-based GlobeInvest Capital Management Inc.

“I think you want to see how it plays out and who’s going to be running the show. Ultimately this whole fiasco has shown that the family actually runs the show, but you do need effective management in there,” GlobeInvest Chief Executive Officer Christine Poole said on BNN Bloomberg Television. “It’s creating a very negative disruptive force for the stock and we’ll find out, it sounds like probably within the next week or so, how it ends.”

Rogers shares rebounded 2.4% as of 12:45 p.m. on Wednesday after the company said a British Columbia court will hold a hearing on Nov. 1 about the dispute between Edward Rogers and his family members. But they’re still about 6% below their Oct. 20 close, after several days of chaos left it unclear who, exactly, is in control of the board.

Edward Rogers is battling mother Loretta Rogers and sisters Melinda Rogers-Hixon and Martha Rogers over whether Edward has the right to control the membership of the board with the stroke of a pen -- and whether the company should let go of Chief Executive Officer Joe Natale.

Poole said she isn’t tempted by Rogers stock despite the deep discount it’s trading at compared to its peers. Her firm owns rival BCE Inc. instead.

While Rogers management is distracted from the day-to-day running of the company due to this feud, the company’s latest earnings were “very encouraging,” she said. “Investors want to see the whole situation get resolved and who’s going to be in place running the company. Markets just want to know certainty on the whole situation.”