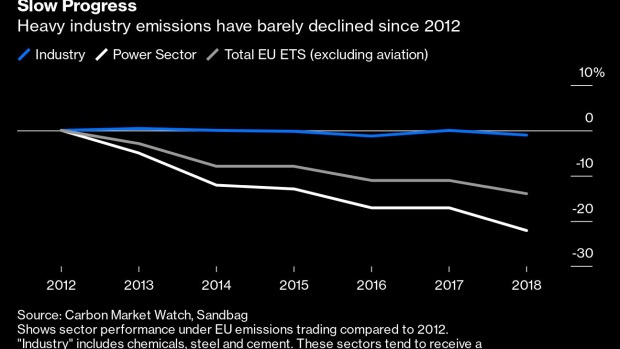 RETFORD, UNITED KINGDOM - NOVEMBER 30: The coal fuelled Cottam power station generates electricity on November 30, 2009 in Retford, Nottinghamshire, United Kingdom. As world leaders prepare to gather for the Copenhagen Climate Summit in December, the resolve of the industrial nations seems to be weakening with President Obama stating that it would be impossible to reach a binding deal at the summit. Climate campaigners are concerned that this disappointing announcement is a backward step ahead of the summit. (Photo by Christopher Furlong/Getty Images) , Photographer: Christopher Furlong/Getty Images Europe

(Bloomberg Opinion) -- Next week, the European Union’s leaders will commit to cutting net greenhouse gas emissions to zero by 2050. This historic pledge will require the continent to radically overhaul its entire economy, including a revolution in the production of steel, cement and chemicals — whose carbon emissions are particularly difficult to abate.

None of this will happen, however, unless European companies feel able to invest in making themselves greener without suffering a loss of competitiveness. So the European Commission has been toying with the idea of a so-called “carbon border tax,” which would penalize imports from countries that don’t meet the same environmental standards.

It’s a sensible idea but one that’s likely to cause the EU no end of grief. If U.S. President Donald Trump gets wind of a European “Green Deal” that includes a possible tax on American imports to help fight climate change (something he appears not to believe in), he’ll no doubt hit the roof. The climate crisis and trade conflicts are two of the world’s biggest challenges and they might be about to collide.(1)

The logic of a carbon border tax is straightforward. To reach net zero emissions, Europe will have to expand the scope and effectiveness of its carbon trading system, which aims to to curb CO2 by making polluters pay. But if the price of purchasing pollution allowances keeps climbing (as it has been), businesses might decamp to countries with laxer emissions controls, a phenomenon known as “carbon leakage.”

“If necessary, if there is carbon leakage, we will have to think about a carbon border tax,” European Commission president Ursula von der Leyen told the United Nations climate summit in Madrid this week.

The risk of carbon leakage is much debated. There’s been little evidence of it so far but that’s probably because carbon prices have been low and heavy industry hasn’t had to expend much effort on cutting emissions; the power-generating sector has done most of the work.

Things are about to become much tougher for Europe’s big industrial companies. In future, they’ll have to shut down their most polluting plants or make them clean. Much of the technology to do the latter is still in its infancy and is expensive.

By forcing non-EU businesses to pay the same carbon price as local companies via the border tax, the theory is that the EU could cajole other countries into following its climate lead, while ensuring a level  playing field for domestic industry. Naturally, large steelmakers such as ArcelorMittal SA are strongly in favor.

Structuring and policing such a tax would certainly be complicated; measuring the carbon content of imported products isn’t simple. There are hints that it will be confined to just a few sectors at first. But the politics are even more nightmarish. Following the U.S. retaliation this week against  France’s digital tax, there’s a danger a carbon border tax would prompt Trump to ratchet up his trade crusades. German industry is particularly worried about this.

The EU says any border tax would have to be compliant with World Trade Organization rules. But Brussels needs to tread carefully and Trump isn’t the only worry.

A decade ago the bloc tried to impose a carbon tax on flights landing in the EU, regardless of where they took off. International condemnation was brutal and swift. Then Secretary of State Hillary Clinton wrote a letter strongly objecting to the EU’s unilateral approach. The U.S. Senate voted unanimously to block American airlines from complying. Amid fears that China would scrap a multi-billion dollar order for Airbus jets, Europe backed down.(2)

Is the EU about to overstep again? Maybe it has no choice. “The world is a different place than it was 10 years ago,” says Andrew Murphy of the research group Transport & Environment. “With smart diplomacy there's no reason why a carbon border adjustment has to suffer the same fate as aviation did.”

The urgency is certainly greater now and lots more countries have embraced emissions trading. But only last week China warned the EU against imposing a carbon tax on its exports.

Europe shouldn’t let itself be dissuaded. Plenty of smart people think carbon border taxes are necessary, including Ben Bernanke and Alan Greenspan, both former heads of the Federal Reserve. As the birthplace of the industrial revolution, the continent has a unique responsibility to curb planet-heating carbon emissions, including those embedded in goods consumed here but produced elsewhere.

So long as net carbon emissions keep rising the planet will keep getting hotter. Countries and companies leading the way shouldn’t be punished for tackling this.

(2) Only intra-European flights were subject to emissions trading.