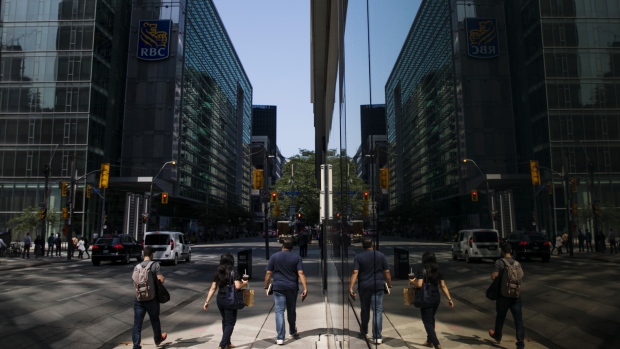 Commuters, reflected on a surface, walk near a Royal Bank of Canada (RBC) building in the financial district of Toronto, Ontario, Canada, on Thursday, July 25, 2019. , Brent Lewin/Bloomberg

We’re heading into what might be the quietest week of the summer as the earnings season comes to a close and investors ease into the Labor Day long weekend.

But there’s still news to watch, as trade tensions escalate and four of the six major Canadian banks report fiscal third-quarter results. Economic growth figures for Canada are due Friday.

President Donald Trump’s twitter tirade upended markets globally Friday with the S&P/TSX Composite Index down 1.3 per cen t, for a second weekly decline. The slide in Canadian stocks wasn’t as painful as the plunge in their U.S. counterparts -- the Nasdaq was down three per cent -- thanks to the heavy weighting of gold miners in Canada. The S&P/TSX Materials Index -- which has an 11.9 per cent weighting on the TSX -- was the only winner with an 1.8 per cent climb.

Now on to earnings.

It looks like money manager Steve Eisman’s short bets on Royal Bank of Canada and Canadian Imperial Bank of Commerce haven’t panned out. At least not yet. Shares of both banks climbed after reporting earnings last week.

Still, it’s worth noting that RBC fell for a fifth consecutive week, its longest losing streak since 2016. The stock has slumped about 10 per cent since its April peak. 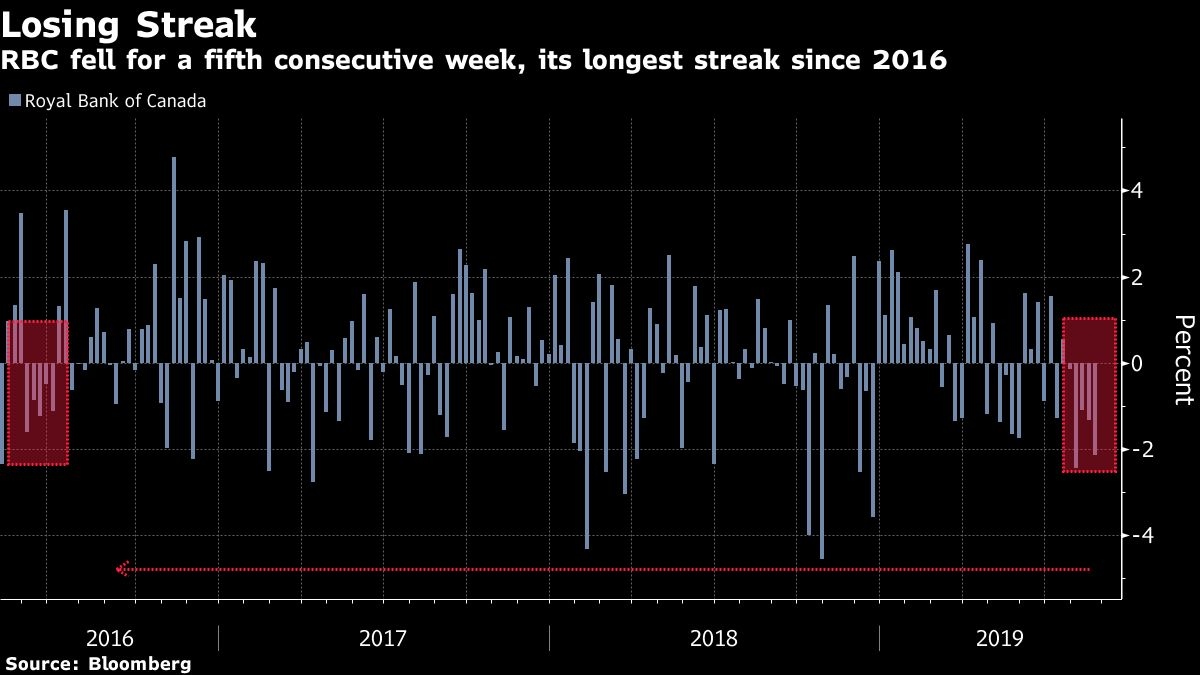 In Eisman’s interview with BNN Bloomberg Thursday -- where he disclosed a short position in retailer Canadian Tire Corp. -- he reiterated his short bets on both banks, as well as Laurentian Bank of Canada and alternative lender Home Capital Group Inc.. He said the timeframe for his bet is nine months to three years.

Bank of Montreal and Bank of Nova Scotia are slated to report on Aug. 27, National Bank of Canada the following day and Toronto-Dominion Bank closes out the season on Aug. 29. Smaller, niche lenders Canadian Western Bank and Laurentian Bank also report that day.

Second-quarter GDP data will be the main event for economy watchers. With July’s inflation holding steady at 2%, tempering the case for a rate cut, market participants will be on edge to see if there’s a hint of a slowdown, which could boost the possibility of an October rate cut. The forecast for June is 0.1% growth, down from 0.2% in May.

Here’s our weekly wrap of what happened in Canada.

What started off as a quiet week on the trade front quickly escalated on Friday as China said it plans to slap tariffs on US$75 billion of U.S. goods in December. Then came Jerome Powell’s speech at Jackson Hole which attempted to reassure markets. But that was a distant memory within minutes as Trump unleashed a Twitter diatribe against his appointed Fed chair.

Canada’s key stock gauge slide 0.7 per cent last week -- setting the stage for the second month of declines this year. Coincidentally, the last monthly decline was in May(down 3.3 per cent), when Trump escalated trade tensions and announced additional tariffs on Chinese goods.

The nation’s 10-year yield slumped 12 basis points to 1.17 per cent Friday, while its 2-year yield also slipped to 1.37 per cent.
Goldman Sachs Group Inc. re-opened the Maple market after more than four months without a primary deal in an early sign that other issuers may follow.

The Canadian dollar gained Friday and fell 0.2 per cent against the greenback for the week.

What the Fed Could Learn From Canada: Narayana Kocherlakota

This year has been one for the record books when it comes to Canadian airline stocks. And it just got better with Amazon.com Inc. and Cargojet Inc.’s announcement Friday that the e-commerce giant plans to take an ownership position in the Canadian cargo carrier via two tranches of warrants issuance.

The stock rallied 13 per cent to close at a record high. Fun fact: Cargojet’s Chief Executive Officer and founder Ajay Virmani gained almost $18 million on paper for the day.

Another Canadian CEO got a nice bump Friday. Entertainment One Ltd.’s Darren Throop saw his stake in the company jump by 10 million pounds (US$12.3 million) as the stock soared after Hasbro Inc. agreed to spend US$4 billion to buy the company. Canada Pension Plan, the largest shareholder, earned 122 million pounds on paper. 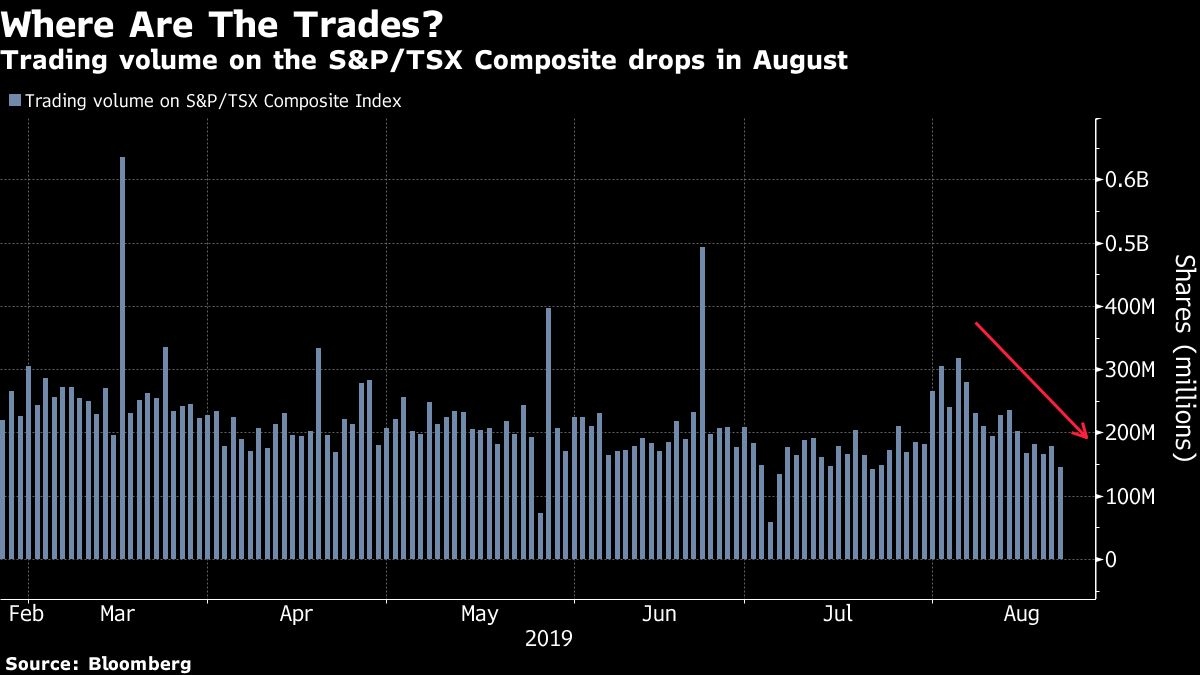 The nation’s growth seems to be on track for a robust second quarter.

Toronto Raptors played a part in Canada’s June retail sales coming in stronger than expected.
Albeit a minor data point, the decline in June manufacturing sales was narrower than expected. Sales fell 1.2 per cent m/m to C$58 billion compared with Bloomberg survey estimate of -1.8 per cent.

1. The City of Toronto is seeking votes for new Etobicoke Centre street names and one of them could be named after former mayor Doug Ford.

#Toronto might soon get a street named after Rob Ford https://t.co/axMbmtOMCMpic.twitter.com/XsETYYSJot

--With assistance from David Scanlan.