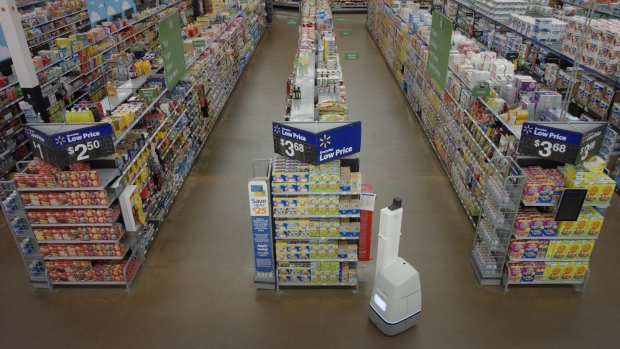 Wal-Mart Stores Inc (WMT.N) is rolling out shelf-scanning robots in more than 50 U.S. stores to replenish inventory faster and save employees time when products run out.

The approximately 2-foot robots come with a tower that is fitted with cameras that scan aisles to check stock and identify missing and misplaced items, incorrect prices and mislabeling. The robots pass that data to store employees, who then stock the shelves and fix errors.

Out-of-stock items are a big problem for retailers since they miss out on sales every time a shopper cannot find a product on store shelves.

Wal-Mart, the world's largest retailer has been testing shelf-scanning robots in a handful of stores in Arkansas, Pennsylvania and California.

"If you are running up and down the aisle and you want to decide if we are out of Cheerios or not, a human doesn't do that job very well, and they don't like it," Jeremy King, chief technology officer for Walmart U.S. and e-commerce, told Reuters.

The company said the robots would not replace workers or affect employee headcount in stores.

The robots are 50 percent more productive than their human counterparts and can scan shelves significantly more accurately and three times faster, King said. Store employees only have time to scan shelves about twice a week.

The idea of installing robots to automate retail is not new. Rival Amazon.com Inc uses small Kiva robots in its warehouses to handle picking and packing, saving almost 20 per cent in operating expenses.

For Wal-Mart, the move is part of a broader effort to digitize its stores to make shopping faster.

In the past year, it has installed giant "pickup towers" that operate like self-service kiosks and where customers can pick up their online orders.

The company has also speeded up the checkout process by allowing customers to scan their own purchases, and it has digitized operations like pharmacy and financial services in stores.