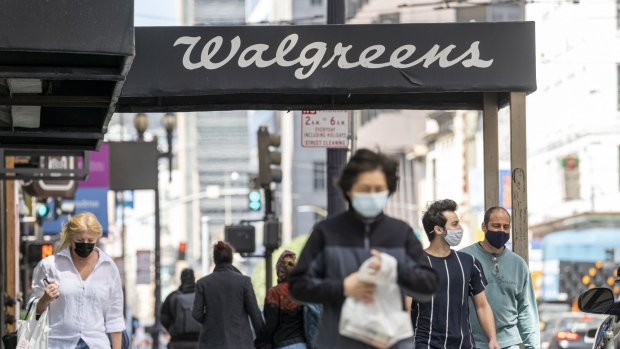 (Bloomberg) -- Walgreens Boots Alliance Inc.’s fiscal fourth-quarter earnings and sales beat estimates as the Covid-19 pandemic and the U.S. immunization campaign continued to have a powerful effect on the drugstore giant’s results.

Walgreens has been giving shots in stores, nursing homes and other locations, with 34.6 million provided in fiscal 2021. Covid vaccines and tests contributed heavily to the company’s sales, as well as to foot traffic that drives non-pharmacy revenue.

The shots, along with a rebound in prescriptions, helped Walgreens’ margins, according to Evercore ISI analysts led by Elizabeth Anderson. Vaccines contributed about 20% to 25% of operating income to Walgreen’s U.S. segment in the quarter, the analysts said in a note.

Shares of Walgreens rose 1.3% Thursday in premarket trading. The stock had gained 19% this year through the close of trading on Wednesday.

Comparable sales at Walgreens’ U.S. stores rose 8.1% from the year-ago quarter according to the statement. Revenue from Walgreens’ international businesses soared 62% from the year-ago quarter, including a currency impact of 9.2%. The increase in international sales reflected the ongoing recovery in the U.K., where pandemic restrictions were lifted in July, the company said