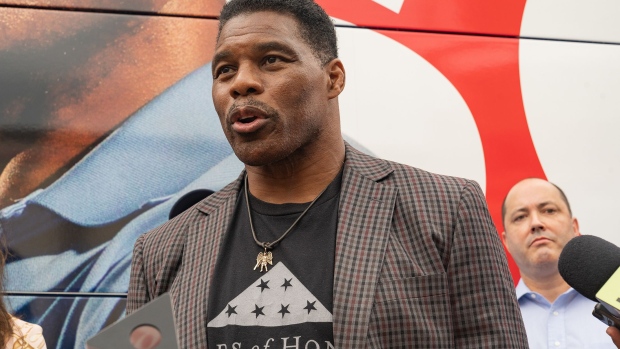 (Bloomberg) -- Republicans are standing by embattled Herschel Walker in his race for a US Senate seat in must-win Georgia as he emphatically denies a Daily Beast report that he once paid for a girlfriend’s abortion 13 years ago.

Abortion has emerged as among the top issues that could decide control of the Senate, and Walker is a fierce advocate for a nationwide abortion ban with no exceptions for race, incest or the risk to the mother.

The report comes nearly a month out from the Nov. 8 midterm elections. Recent polls have shown the two candidates in a statistical tie for a Senate seat highly coveted by both parties.

“I deny this in the strongest possible terms,” Walker said in a statement that was posted on Twitter Monday night.

Walker, a football star at the University of Georgia who won the Heisman Trophy and went on to a career in the NFL, entered the race at the urging of former President Donald Trump.

The National Republican Senatorial Committee signaled that it doesn’t plan to abandon Walker’s candidacy in light of the reports.

“This is just like the smears they attempted against Brett Kavanaugh and Clarence Thomas, and it will not work. Herschel has denied these allegations and the NRSC and Republicans stand with him, and Georgians will stand with him too,” NRSC Chairman Rick Scott said in a statement Tuesday.

On Monday, the Beast published an article about a woman who said she had a relationship with Walker in 2009 and became pregnant. The woman, whom the Beast did not name, said Walker sent her a $700 check so she could have an abortion.

The Beast added that the woman provided a receipt from an abortion clinic, a copy of a check said to be from Walker as well as a get-well card.

Senator Raphael Warnock, the Democratic incumbent who is seeking a full six-year term, leads Walker by 0.7 percentage points in a RealClear Politics average of polls. His 2021 run-off election victory tipped the balance of the US Senate, giving Democrats control of Congress and the White House.

The chamber is split 50-50 with Vice President Kamala Harris holding the tie-breaking vote.

Midterms typically favor the party out of power during a president’s first term. But the US Supreme Court’s June ruling that overturned the case that legalized abortion provided a spark for Democrats, igniting their base and offering optimism that the party may be able to buck the historical trends, particularly in the Senate.

The White House has an event planned on Tuesday where President Joe Biden will unveil new guidance from the Education Department requiring universities to protect students who terminate their pregnancies from discrimination, the latest effort by Democrats to focus attention on abortion rights ahead of the midterms.

After Walker issued his statement, his son Christian Walker took to Twitter to criticize his father.

“I know my mom and I would really appreciate if my father Herschel Walker stopped lying and making a mockery of us.”

Herschel Walker later tweeted: “I LOVE my son no matter what.”

His performance as a candidate has been uneven. He has been accused of inflating his accomplishments, and his campaign has had to deal with a series of questions about his personal life, including about how many children he had fathered.

Walker has expressed support for Senator Lindsey Graham’s proposal that would prohibit the procedure after 15 weeks of pregnancy, with some exceptions.