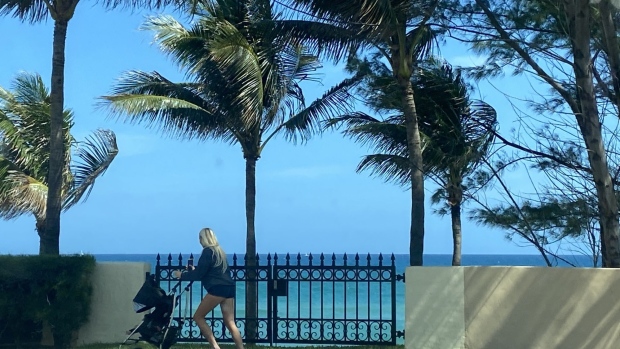 A car with a New York license plate is shown parked Outside Palm Beach Day Academy on Seaview Street in Palm Beach. , via Bloomberg

(Bloomberg) -- The “Upper East Side” cocktail at Sant Ambroeus is just the same as in Manhattan, the carpaccio at Cipriani as meaty red as on Wall Street.

Here is the private-equity billionaire Stephen Schwarzman, on his way to La Goulue, the clubby French bistro popular with Park Avenue socialites. There is David Solomon, the Goldman Sachs Group Inc. chief, a team of financiers in tow.

The names and the money say New York, but the aquamarine pools, the swaying palms and the sultry Atlantic breezes say something else: Florida, the would-be Wall Street South.

For months now, A-listers and lesser-lights from the world of high finance have been traveling to the Sunshine State while riding out Covid-19. Hopeful locals see evidence that the area’s long-elusive dream of luring Big Finance for good might be coming true at last. Along Worth Avenue in Palm Beach, real estate agents count commissions from a pandemic-induced real estate boom. Private schools fantasize about attracting the Spence set.

The reality is more nuanced -- much more.

Only a small percentage of Manhattanites moved permanently to Florida last year. And as vaccinations stir fresh hope that the pandemic’s end is near, ebullient talk of South Florida drawing Wall Streeters en masse is already beginning to fizzle.

Dan Sundheim, founder of New York-based hedge fund D1 Capital Partners, will very likely leave Palm Beach and return to his Park Avenue home, according to a person familiar with his plans. David Tepper, who moved back to New Jersey from Miami last year, is staying in his home state for now, even though he and wife just bought a $73 million Palm Beach mansion.

“The main problem with moving to Florida is that you have to live in Florida,” said Jason Mudrick, who oversees $3 billion at Mudrick Capital Management and has resided in Manhattan for more than two decades.

“New York has the smartest, most driven people, the best culture, the best restaurants and the best theaters,” he said. “Anyone moving to Florida to save a little money loses out on all of that.”

By late last year, one might have been excused for thinking that Manhattan would soon be bereft of dealmakers, money managers and traders. Elliott Management Corp., Citadel and Point72 Asset Management had all announced plans to open offices in Florida, and Goldman was weighing whether to move some asset-management jobs there.

Doug Cifu, head of market-maker Virtu Financial Inc., said he couldn’t wait for the 6-minute commute in his Corvette when he moves to new offices in Palm Beach Gardens from New Jersey. Scott Shleifer, a top executive at Tiger Global Management, just bought a $132 million house in Palm Beach and plans to establish residency there.

Much of the narrative around these relocations centered on taxes and business-friendly climate. Florida has no state income tax, while New York City’s is among the nation’s highest.Yet U.S. Postal Service data paints a different picture: Last year, 2,246 people filed a permanent address change from Manhattan to Miami-Dade County and 1,741 went to Palm Beach County. Together they account for 9% of the out-of-state moves from the borough, up from 6% in 2019.

Still, even a small number of departures by the ultra-wealthy can have an outsize impact. The top 1% of New Yorkers paid $4.9 billion in local income taxes in 2018, comprising 42.5% of the total collected, according to the city’s Independent Budget Office.

Read more: New York Worries Top 1% Will Flee With $133 Billion of IncomeMore Manhattanites relocated to Jersey City, Los Angeles, Philadelphia, Chicago and Hoboken, New Jersey, than they did to either Miami or Palm Beach. Except for Philadelphia, the other destinations are in some of the highest-taxed states.

While Elliott is moving its headquarters to Florida, founder Paul Singer is staying in the Northeast. New York will remain its biggest office and the firm’s new Greenwich, Connecticut, outpost will also be larger than the Florida hub, according to a person familiar with the plans.The main drivers for people to stay in New York are access to top private schools and a bigger pool of young professionals to fill jobs, according to interviews with several hedge fund executives.That’s similar to what AllianceBernstein Holding LP found when it decided to move its headquarters to Nashville from Manhattan in 2018. While more than 1,000 jobs at the $688 billion money manager are transferring out of the city, high-profile positions like private wealth and portfolio management stayed, a reflection of where the firm’s clients were.

Many executives resisted relocating themselves, according to one senior manager. Older employees who left Manhattan for Music City complained about uprooting their families, and finding high-quality talent proved much harder in Nashville, the person said.

A representative for the firm said AllianceBernstein is “pleased with our senior leadership located in Nashville” and lauded “the great local talent we have recruited.”

One hedge fund founder who spent the past six months in Miami is still deciding whether he’ll stay. The forces pulling him back are New York’s dynamism and his children’s school, which he likes better than the one they’re attending now. Either way, he’ll keep his New York office -- because many of his employees with kids don’t want to leave -- as well as his place in the Hamptons, because no one wants to be in South Florida in the summer.

Parents leaning toward staying in Florida are finding that many of the private schools are at or near capacity. Fanning Hearon, the head of Palm Beach Day Academy, said enrollment rose 22% to 480 students in the past 18 months, and some classes already have waiting lists. Other schools in the area report that they, too, have little room for more. Meanwhile, New York’s elite private schools said they’ve seen enrollment jump and few students leaving for Florida.

Cristobal Young, a sociology professor at Cornell University and author of “The Myth of Millionaire Tax Flight: How Place Still Matters for the Rich,” predicts that relocation will remain minimal because wealthy people generally stay put.“They live where they became successful, where they have industry connections, employees and customers, and where they sit on nonprofit boards,” he said. Young, who has studied the effects of tax increases in California and New Jersey, said they barely caused an uptick in interstate migration, which stands at about 2.4% a year among U.S.-based millionaires.Then there is the lure of New York as everything starts to reopen.“It will be like the roaring ’20s -- you’ll see a resurgence here like never before,” said Mudrick, who predicts some of his friends who moved to Miami will soon be back. “You want to be buying New York and selling Florida -- that’s the contrarian in me.”