The Federal Reserve isn’t done tightening the screws on the economy -- and doesn’t care what that does to your portfolio.

It took six months, but that message is getting received loud and clear in the stock market, day by day. From retail traders to smart-money speculators, virtually every constituency on Wall Street is pulling up stakes.

The S&P 500 sank to another bear-market low Thursday, barreling through levels that in past downdrafts had acted as a support. More than 450 stocks dropped in a lockstep rout, while the Cboe Volatility Index stayed elevated above 30 for four straight sessions. Key financing markets flashed signs of potential stress, from declining liquidity in the world of interest-rate swaps to a large debt offering that was said to have been shelved.

These kinds of disruptions previously saw Fed officials in the bull-market years rush to the airwaves to calm rattled nerves, effectively conditioning investors to buy dips. That mentality juiced risk rebounds in March and June even as the central bank stepped up its battle against inflation.

Fed officials Thursday again hammered home their intention to keep tightening until inflation comes down, markets be damned -- more or less. Retail investors, who bought almost every dip since the Covid crash, are exiting stocks at a rate not seen at any time since the pandemic lows while spending a record to lock in protective options. Meanwhile, hedge funds tracked by Morgan Stanley have cut equity exposure to the lowest on record, boosting short positions against exchange-traded funds for an 11th straight session.

“Institutions have already been fairly pessimistic about the market the whole year, and now you’re starting to see some retail capitulation,” said Michael Wang, chief executive officer at Prometheus Alternative Investments. “There seems to be a heck of a lot of pessimism out there.” 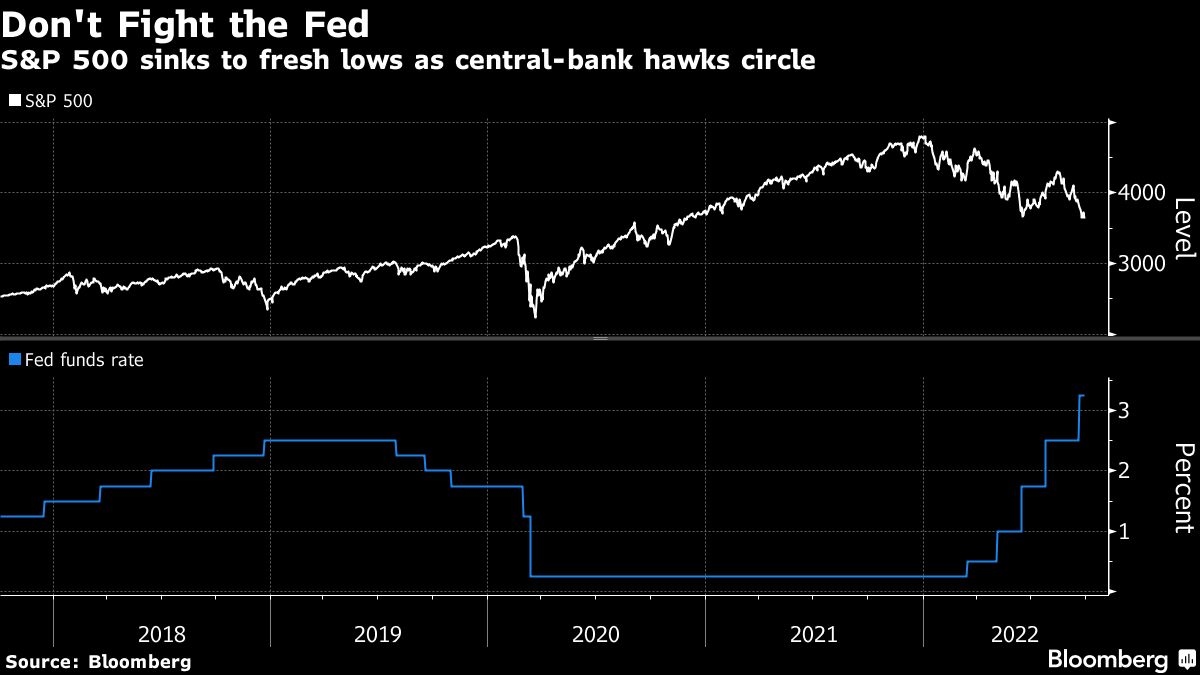 The S&P 500 fell again Thursday, bringing its year-to-date loss to 24 per cent.

After frequently clashing during the post-pandemic era, Wall Street and Main Street are now bailing on equities in the latest sign of the toll exacted by this year’s crushing bear market. Retail investors dumped US$2.9 billion of equities over the week through Tuesday, according to a JPMorgan Chase & Co. estimate derived from public data on exchanges. That’s more than four times the amount of shares they disposed at the market’s trough in mid-June and marks the second-largest weekly selling in the last five years.

So obsessed with the fear of a looming market crash that the small-money crowd last week spent an unprecedented US$18 billion on opening put buying, Options Clearing Corp. data compiled by Sundial Capital Research show. Adjusted for market capitalization, demand for hedges reached the highest level since the 2020 meltdown.

The action marks a notable shift for the once-faithful retail army and adds to a growing list of evidence on extremely bearish sentiment that’s often cited as a key reason why a market bounce is on the horizon. Last time when they were selling this aggressively in March 2020, stocks bottomed one week later.

“Given this precedence it should be considered as a constructive signal for the market,” said JPMorgan strategist Peng Cheng. “Retail sentiment has been gradually weakening in the last few weeks but has significantly deteriorated this past week.” 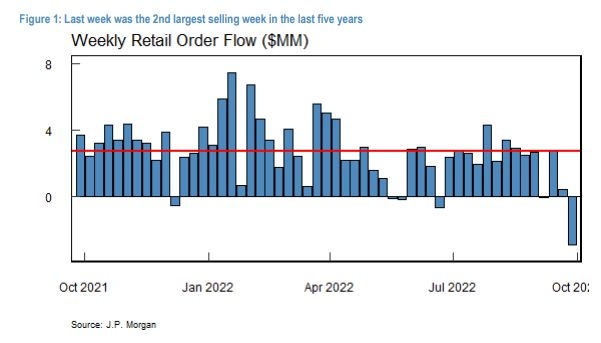 Yet skeptics say any equity gains are unlikely to last. Even after a US$15 trillion wipeout, shares are no obvious bargains. And in an investing world where everything is increasingly synced-up, it’s hard to imagine renewed buoyancy in equities when bonds and currencies are in turmoil amid a wave of monetary tightenings worldwide, while U.K. chaos only darkens the global outlook further. 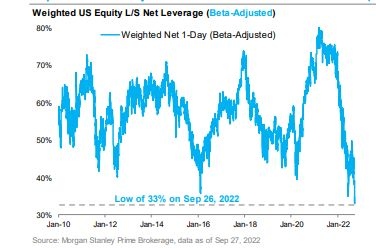 Even the usual skeptics are getting more downbeat. Hedge funds continued to trim their exposures, with net leverage -- a measure of the risk appetite that takes in account the group’s long versus short positions -- falling this week to the lowest level since Morgan Stanley’s prime broker began tracking the data in early 2010.

Even on the long side, there is a clear pivot toward risk aversion. After parting with growth darlings like software makers, hedge funds have gravitated toward defensive, low-volatility stocks such as consumer staples and healthcare in the past month.

“Not only is the balance between long vs. short exposure at lows, but the exposure is now more concentrated in lower-beta names as hedge funds have attempted to mitigate risk amidst the recent market volatility,” Morgan Stanley’s prime broker team including Bill Meany wrote in a note.